One arrested following nighttime incident at Meadowvale in Co Wicklow 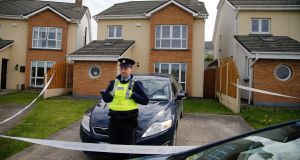 The scene of the stabbing at Medowvale, Arklow, Wicklow. Photograph: Nick Bradshaw

A 37-year-old man has died after a stabbing incident at a house in Arklow, Co Wicklow.

The victim has been named locally as Stephen Kavanagh and gardaí investigating the incident have detained a man in his 40s for questioning.

Mr Kavanagh was discovered with apparent stab wounds by gardaí after they were called a house at The Crescent in Meadowvale shortly after 12.30am on Monday following an incident.

The man was treated at the scene by emergency services before being rushed to St Vincent’s University Hospital but he was pronounced dead a short time later.

Gardaí have since arrested a man in his 40s in connection with the incident. One report suggested the man had handed himself in to gardaí after the altercation.

He is currently being detained under Section 4 of the Criminal Justice Act at Arklow Garda Station while the investigation is ongoing.

A Garda technical team attended the scene to carry out a forensic examination.

He said: “Death is difficult at any time but the circumstances of this are horrendous.”

Fr Murtagh added: “A mother has lost her son and that is heartbreaking. There’s a lot of sadness and the whole community is shocked.”

Expressing his sympathies Fr Murtagh said Mr Kavanagh was “a young man who should be at the height of his productivity. Hearts are broken, feelings are all over the place and the family is hurt and devastated.”

Fianna Fáil Wicklow TD Pat Casey said he did not know Mr Kavanagh or the exact circumstances of the incident.

Mr Casey said the death was “disturbing and concerning for everyone in Arklow but particularly for the residents of the estate”. He added that it was unusual for such an incident to occur in Arklow and it had come as a shock to the community.