Zombie students: Queues outside libraries before 7am as pressure grows 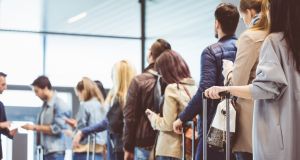 College authorities have been adding more and more study places each year, but have been struggling to keep up with record levels of demand. Photograph: iStock

It’s midnight outside UCD’s James Joyce library and hundreds of bleary-eyed students are trailing out the main door.

Some have been here since first thing in the morning in order to grab a coveted seat with a socket to plug in their laptops.

“We had a queue of about 200 students this morning, before the doors even opened at 7am,” says Barry Murphy, president of UCD students’ union. “If you don’t get here by 8.45, you’re just not going to get a study space with a socket.”

College authorities have been adding more and more study places each year, but have been struggling to keep up with record levels of demand.

While the library is always busy at exam time, demand has been rising right throughout the academic year.

Recently, opening hours at the library at peak times were extended from 11pm to midnight.

By contrast, demand for the college’s student bar – once a thriving hub right throughout the year – has been falling steadily.

“It’s a symptom of the pressure students are under,” says Murphy. “We end up giving students breakfast in the morning, because they’re like zombies.

“Students these days,” he says, “are much more career- and employment-focused from the moment they enter college.”

Whereas once simply getting to college was considered an achievement it itself, a dramatic increase in the proportion of school-leavers progressing to third level means many feel under greater pressure to succeed.

“You have students stressing about only getting 2:1s instead of 1:1s. There’s peer pressure when they see others doing well. There are parental expectations and there’s self-imposed pressure too,” he says.

Extracurricular activity also seems to have taken a hit. Events which take place in the evenings, such as debates or large-scale functions, are not getting the numbers they used to.

“Students don’t tend to hang out as much in the evenings,” says James Alkayed, chair of UCD’s societies council. “They’re busier with continual assessment or part-time work or commuting.”

Instead, much society activity has switched to smaller-scale morning events, such as coffee mornings.

There are growing signs that pressure on students may be contributing to a rise in stress and mental health problems right across third level.

Many clubs and societies report that attendance engagement levels are falling, with students saying they have less time to dedicate to extracurricular activities.

By contrast, numbers going to the gym are rising, leading to concerns that many are more isolated and missing out on the vibrant social life that has always been associated with college.

Against this backdrop, record numbers of third-level students are seeking counselling for anxiety and related mental health problems.

College-based counsellors say numbers seeking therapy or counselling have surged since 2010, from 6,000 students to well over 10,000 in 2017.

John Phillips, president of the Psychological Counsellors in Higher Education group, says pressure to succeed in college is just one of a number of factors behind the rise in numbers experiencing anxiety, panic attacks or acute stress.

Other triggers can include social media use, relationship break-ups, isolation, long-term effects of family issues and increasing openness around mental health problems.

Does he feel there is greater pressure on students now than before?

“Hugely so,” says Phillips. “With more third-level students, there’s more competition for what’s out there. There are more going on to do a masters or PhD, which can be very difficult, constantly feeling that you’re never getting to a comfortable place.”

Isolation can be a big problem, especially among international students who have paid hefty tuition fees to study here .

Many, he says, find the college campus empties out on a Friday and is quiet again until Monday, with little to do in the meantime.

The introduction of semesterisation to colleges over the past decade or so was aimed partly at reducing pressure on students.

Instead of a make-or-break exam in the summer, the idea was students would fare better with exams at Christmas and summer, along with a greater emphasis on continual assessment throughout the year.

All colleges have now adopted this approach. Opinion, however, is divided on whether it has actually relieved stress on students or contributed to greater sense of ongoing pressure.

Trinity College Dublin finally broke with its 400-year exam tradition of high-stakes summer exams only by introducing semesterisation this year.

However, hundreds of students have signed a petition stating that the changes have resulted in even greater workloads and a steep decline in their participation in societies.

Luke Fehily, a third-year nanoscience student, says that while the theory of the changes is laudable, its poor implementation has made life “impossible” for many students.

“Most Stem [science, technology, engineering and maths] students have high contact hours including labs and lectures, and large amounts of continuous assessment, leaving virtually no time for necessary study. You end up stressed, cramming and unable to grapple with new concepts.”

He argues that this has resulted in “widespread stress, with many people feeling far less prepared for assessment than in previous years . . . Many of us now feel our mental health come second to college work.”

Gráinne Ní Sheasnáin, a second-year arts student, says she has had to cut down on extracurricular participation in societies to keep up with college work.

“My fear is that I’ll come to the end of my degree and say, ‘Yes, I passed my exams and have done well’ – but it will be like the Leaving Cert: what did I really learn?” she says.

“Societies offer a social network and valuable skills you may not get a chance to nurture in a degree . . . if students have less time to get involved, how will they know where potential passions separate to their course of study lie?”

She also argues that semesterisation has reduced the quality of learning.

“Unlike the old system, where students would have weeks to write essays, followed by months to read for exams, the new academic year structure doesn’t allow for the same level of research to be channelled into essay and exam preparation.”

Trinity’s outgoing vice-provost Prof Chris Morash acknowledges there have been problems with congestion of assignments towards the end of term.

However, he said recently that a mapping exercise was under way to ensure there is more co-ordination in future.

Ultimately, he says, the changes will boost the quality of learning and reduce pressure on students with fewer exams.

“Under the old system, students were being examined on things in April which they studied back in October . . . Now, students are getting formative feedback. So, semesteriation provides you with a sense of how you’re doing.”

Meanwhile, there is growing concern in some colleges over a cohort of students believed to be among the most at risk: first years.

Among some individual courses – such as advanced certificate or ordinary degrees in institutes of technology – dropout rates climb above 70 per cent.

While these dropout rates owe much to a student’s academic ability, concern has been expressed more broadly that pressure is also a key factor.

The governing body of Technological University (TU) Dublin – formed from the merger of DIT, IT Blanchardstown and IT Tallaght – has privately expressed concern at the numbers dropping out after January exams, as well as pressures facing first years generally.

“Semesterisation appears to have encouraged continuous assessment in addition to exams rather than as an alternative to exams,” governing body members said recently, according to an internal document.

Pierre Yimbog, president of the college’s student union, says the pressure for first years can come from all angles.

“Many are also juggling part-time jobs. If you’re on a student grant, for instance, it won’t cover your rent,” he says.

“Some end up working 30-hour weekend jobs, which just isn’t sustainable and eats into college time . . . They end up surviving on Red Bull and Monster [energy drinks] just to get through their courses.”

A spokeswoman for TU Dublin said it had adopted a “framework for first-year student success” to help new students.

This includes mentoring from older students, better orientation and early provision of feedback for assignments.

Many courses, she said, are now trying to avoid high-stakes exams at Christmas for first years and are putting a greater emphasis on continuous assessment and project work.

There is no mistaking, however, that students are coming of age in an environment in stark contrast to that experienced by previous generations.

Whereas once, knowledge was confined to a few library books, nowadays it is easy to feel overwhelmed with the sheer volume of information.

“In some ways, they are more confident than we ever were – and, paradoxically, more anxious,” he says.

“A generation ago, you were dealing with people who were often the first in their family to go to university. Now, for many, they are the second generation and there is an expectation that they will do well. They face a very different set of expectations.”