In praise of: Owen Keegan

Dublin sheriff not afraid to face down Ireland’s favourite cowboy 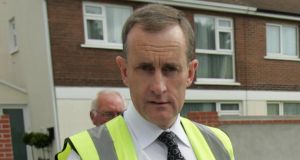 There is a man who stands alone. He wants a quiet life but he steps up and does what he has to for the good of the townsfolk, even if they hang him out to dry.

Who is this man? Is it Gary Cooper? Maybe Gregory Peck? Perhaps it’s good old John Wayne. No, there’s a new sheriff in town and his name is Owen Keegan.

Not only did the Dublin City Council chief executive face down Ireland’s favourite cowboy this week, but he withstood pressure from all quarters to reverse a statutory decision, one which had behind it the weight of planning legislation.

While the townsfolk were happy to make him the scapegoat for the “debacle”, and Garth Brooks’s 400,000 ticket-holding fans wanted to hang him out to dry, Keegan simply pointed out that once the decision had been made, it could not be unmade.

“It is not legally possible for the council to reopen the decision to grant a licence or to amend the conditions attaching to that licence,” Keegan told councillors last Monday.

He stuck to his guns – well, mostly. The offer made to Brooks of performing matinee shows before two of his night- time concerts might be seen as an amendment to the licence, which stated that “music from all concerts shall not start until 6pm”. But Keegan and his planning department said the change could be made by way of an “updated event management plan”. It was not an amendment to the licence per se, but a change to how an event would be run.

A fudge certainly, but a fudge that shows Keegan is willing to be flexible, and is trying to reach a solution without reversing the licensing decision. Because that would be a step too far. Reverse one licensing decision, and not only is the council left open to legal action, but Keegan would forever and a day come under pressure to reverse others.

In the event it was academic, as Brooks refused to become a matinee idol and stayed a gunslinger or, perhaps more accurately, a spoilt popstar who, despite claims he was willing to do anything to resolve the situation, has shown he isn’t willing to be flexible at all.

If further proof of Keegan’s true grit was needed, it’s that he has not passed on the blame.

He has stood over a licensing decision made, not by himself, but by the senior official in the council’s planning department.

In the finest traditions of country music, Keegan is standing by his man.