Humans responsible for extinction of 680 vertebrate extinctions since 1500 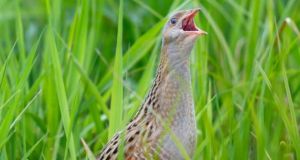 The corncrake, known for its rasping call, was once widespread across the countryside, but the population was decimated by mechanised farming. Photograph: iStock

The global assessment of nature confirms that accelerating loss of plants and animals is affecting every part of the planet – Ireland included.

Human actions have already driven at least 680 vertebrate species to extinction since 1500, with many more likely to follow in coming decades, the Intergovernmental Science-Policy Platform on Biodiversity and Ecosystem Services (IPBES) warns. These include the Pinta Giant Tortoise in the Galapagos in 2012.

Intervention can work. Successful conservation efforts have saved from extinction at least 26 bird species and 6 ungulate species (large mammals, horses and rhinoceroses) including the Arabian Oryx and the Przewalski’s Horse. But the ability to save many species will not be possible based on current destruction of natural systems, it adds.

While the IPBES global assessment does not provide a country-by-country breakdown, the following Irish species are classified by scientists as under immediate threat; some are “critically endangered”:

– Angel Shark (probably less than 10 individuals are left, threatened by catch in nets set for crustaceans; notably the crawfish which also happens to be endangered);

– Six types of bee are CR, mostly due to the lack of flowers in the countryside and pesticide use;

– 20 species of plant are CR including the cloudberry (found from a single bog in Co Tyrone), Irish fleabane (reduced to a single clump on the shores of Lough Derg) and the Limestone fern (a single site in Mayo);

– No mammals are critically endangered but six species are already extinct including the grey wolf and the Irish Elk;

Birds are not assessed in this way but BirdWatch Ireland highlight 37 species on their “red list” and of these the curlew, the ring ouzel, quail, nightjar, golden eagle, lapwing, golden plover, dunlin, redshank, corncrake and twite could be considered in imminent risk of extinction.