Sheila O'Leary's father Thomas Francis Byrne, known as Byrne the Boer, and her mother Lucy Agnes Smyth, of Cumann na mBan, were both at the GPO during the 1916 Easter Rising. She recounts her family's incredible history. Video: Kathleen Harris 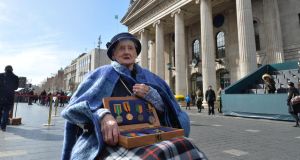 Sheila O’Leary, whose parents were both in the GPO during the Easter Rising, has died at the age of 97. .Photograph: Alan Betson

Sheila O’Leary, whose parents were both in the GPO during the Easter Rising, has died at the age of 97.

Mrs O’Leary nee Byrne was born in Dublin in December 1921, the same month that the Treaty setting up the Irish State was signed.

Her father Thomas Francis Byrne was known as Byrne the Boer, so called because he had served with Major John MacBride in the Irish Brigade during the Boer War. Mr MacBride was later executed for his part in the Easter Rising.

Mrs O’Leary’s mother Lucy Agnes Smyth was with Cumann na mBan. She served as a nurse with the GPO garrison during the Easter Rising.

The distinction of having both parents in the GPO was one Mrs O’Leary shared with the former Taoiseach Garret FitzGerald.

Mrs O’Leary was guest of honour on Easter Sunday 2016 for the Rising centenary  commemorations and provided one of the most memorable images of the day.

She came with her family medals in a wooden box and confessed to have been overcome with emotion on several occasions.

“It was absolutely amazing. I’m lost for words,” she told The Irish Times afterwards.

“I feel very emotional when I think of the values of every one of those Volunteers. They all deserve to be honoured.”

On Easter Monday 1916 Tom Byrne and 15 volunteers in Maynooth marched to Dublin. Their feet were swollen from their exertions and Lucy Smyth offered him a bowl of warm water to ease the pain. Later Mr Byrne gave his future wife his watch and money for safekeeping.

Her father was 39 in 1916 and had already lived an extraordinary life.

Mr Byrne went to South Africa during the gold rush of the late 19th century. When the Second Boer War broke out, he fought on the side of the Boers against the British. Mr MacBride was later executed for his part in the Easter Rising. While in South Africa, Mr Byrne witnessed the capture of a young war correspondent by the name of Winston Churchill.

“[MY FATHER] used to tell me about life on the Veldt,” his daughter told The Irish Times in 2016. “I knew a little bit about South Africa. He didn’t talk much about 1916. He talked more about the Boer War.”

Later, he emigrated to the US, joined Clan na Gael and worked as a miner in Montana and California. In 1913 he returned to Ireland on holiday but decided to stay and join the newly founded Irish Volunteers.

Mrs O’Leary’s parents were proposer and seconder for a Cumann na mBan recruit in 1915. It does not appear the pair were romantically involved at the time of the Easter Rising, but there is a romantic twist to their story which makes it even more intriguing.

Before they became romantically entangled, Con Colbert, who was executed for his part in the Easter Rising, was in love with Lucy Smyth.

In her witness statement to the Bureau of Military History, Con Colbert’s sister Elizabeth recalled that he “would probably have married her if he had lived. She was a nice, gentle, refined girl. She afterwards married Tom Byrne, of Boer War fame, who was also keen on her.”

Mrs O’Leary remembered her father as a “humble, peaceful man” who was mad about fishing. After retiring from the Army, he was made Captain of the Guard at Leinster House. Politicians would call round looking for advice on angling. It was the only time politics intruded on the Byrne home.

They had a grace and favour house in the Phoenix Park, but later moved to a permanent home on the Old Cabra Road.

She described Mr Lemass as “methodical” and the right man for the country at the time.

In an interview with The Irish Times in 2016, Mrs O’Leary said of her parents: “When I think back, they were so brave and so courageous. They put their country first. It is better late than never that they are honoured, but it has taken a long time.”

Mrs O’Leary died on Tuesday at Nazareth House nursing home where she had been a resident for many years.

She is predeceased by her husband Arthur (Art) and is survived by her children Mary, Conor, Emer, Tadhg (Tim) and Maeve and four grandchildren.

She will repose at the Kirwan Funeral Home in Fairview Strand on Friday, November 1st. Funeral mass will take place on Saturday morning at 10am in the Church of St. Vincent de Paul, Griffith Avenue, Marino with funeral afterwards to St Fintan’s Cemetery Sutton.