Photographing the Troubles: ‘like being a war correspondent in your home town’

‘You can’t see what we’ve seen without it having an impact on you,’ says Alan Lewis 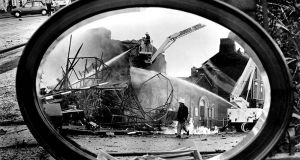 Photograph by Trevor Dickson: The police station on Lisburn Road was bombed on December 16th 1986. I noticed the houses across the road had been badly damaged and spotted a mirror on the lawn of one of them. It amazed me that it hadn’t been damaged and an idea came into my head right away. I propped the mirror against what was left of their garden pillar. I always tried to make something a little bit different, rather than the usual point and shoot

There was no boasting at the launch of a new book about photographing the Troubles, Shooting the Darkness, just an ineffable sadness about the horror that had to be covered.

Based on the RTÉ documentary of the same name, Shooting the Darkness presents the images and personal reflections of seven photographers who documented events in Northern Ireland.

One of them, Alan Lewis, who covered the Troubles from 1971 and is still taking photographs, was quietly proud of his own work and that of his colleagues. “We showed what was happening as honestly as we could,” he said. But none of those pictures feature on his walls today. Rather, the images in his apartment are shots he took of Freddie Mercury, David Bowie, Ray Davies and Elton John.

“I have no Troubles pictures hanging,” he said. “Why would you?” he added, reflecting how personally testing it was, as the book states, to be a “war correspondent in your home town”.

Lewis has the professional’s satisfaction that he did a good job recording history as it happened, but at the same time he leans to happier images and times.

“It’s how you deal with things, it’s a coping mechanism,” he said. “Some of the things you are seeing and photographing, you are seeing with first responders, it’s difficult. You can’t see what we’ve seen without it having an impact on you.”

Stanley Matchett also has some striking photographs in the book launched in Dublin on Wednesday and Belfast on Tuesday.

They include Bloody Sunday in Derry in 1972 and Fr Edward Daly waving a blood-stained white handkerchief leading a little, huddled group carrying the body of 17-year-old Jackie Duddy, one of 13 shot dead that day by British paratroopers.

In the book there is also a photograph Matchett took of the terror of Bloody Friday the same year, when the IRA exploded bombs all over Belfast killing nine people and injuring 130. Another of his images shows a young British paratrooper comforting a young woman from, perhaps, one of those almost forgotten bombings – another IRA explosion in Belfast city centre in March 1972 that killed seven and injured 148.

The images that gave Matchett more satisfaction, also included in the book published by Blackstaff Press, were of young boys playing marbles on the Shankill Road, two little girls on swings in Clifton Street, and the Beatles in Belfast.

He reminisced about how “the ’60s were just a wonderful time to work in photography”. Of the period that came afterwards, he said, “Thing got so nasty here . . . you can say you can photograph things and not feel the hurt . . . some of the things you see you wonder are you wise photographing them. But we have to do our job.”

There are many more moving images in the book from photographers Trevor Dickson, Paul Faith, Martin Nangle, Crispin Rodwell and Hugh Russell.