Automatic pension scheme to be introduced over decade 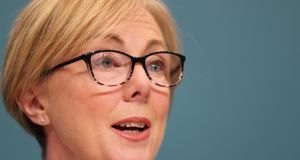 Minister for Employment Affairs and Social Protection Regina Doherty: “I want to ensure that the pensioners of tomorrow don’t just have enough to live on but have a comfortable life in their retirement.” Photograph: Nick Bradshaw

A key change has been made to the auto-enrolment pension scheme for private sector workers which involves a more modest timescale for increasing the contributions of employees and employers.

The scheme was formally announced by Minister for Social Protection Regina Doherty on Wednesday after she obtained Cabinet approval to go ahead with it.

It is aimed at 585,000 private sector workers who have no pension provisions at present. Under the plan they will be automatically enrolled in the new State-backed scheme, with a view to making an annual contribution of 6 per cent of their salary to pension savings within a decade. The employer will provide matching funds.

Ms Doherty said her intention was to meet the target set out in earlier drafts of the scheme, which is for the scheme to start in 2022.

However, in an important change borne out of feedback received during the consultation period, the ambition of the scheme has been scaled back. Instead of the employee reaching the 6 per cent contribution of salary within six years (with a 1 per cent increment each year) the plan has been varied to reach it within ten years.

The new proposal is an initial 1.5 per cent contribution to be increased by 1.5 per cent every three years to bring it to 6 per cent in nine years rather than six.

Under the original proposals, the State was going to provide an additional 2 per cent to the savings as an incentive measure. However, Ms Doherty said that was one of five areas not yet been fully resolved. She said this issue generated much debate within the consultation process and was the subject of ongoing discussions with Minister for Finance Paschal Donohoe.

“We want to create a system where people can see [they can] get an advantage. The incentive has to be enough but not so much that it causes undue burden [to other taxpayers],” she said.

Some two-thirds of employees in the private sector have no pension at present. There is also what is called a demographic time bomb where the ratio of workers to pensioners will fall rapidly by mid-century. Moreover, there are concerns that the State pension would not be adequate in itself as a sustainable source of income.

Under the scheme, every employee in the private sector who earns above €20,000 will be enrolled automatically in the scheme. They will then have the option of withdrawing from the scheme. If they withdraw, or take a pause, there is a mechanism where they will be automatically enrolled once more after three years.

Experience in other countries has shown that few people opt out of such schemes.

The department has yet to resolve some other issues, including how the savings will be encashed or drawn down, the design of the central processing authority (which will oversee the scheme) and the investment framework.

“I want to ensure that the pensioners of tomorrow don’t just have enough to live on but have a comfortable life in their retirement,” said Ms Doherty.

“This is a crucial reform for Irish society overall. It is important that everyone is on board for this [change].”