‘We just won’t put up with it’: Truckers on Irish Sea border delays

The Brexit agreement puts some customs and regulation checks at ports on the Irish sea, but is there infrastructure and personnel there to meet the demand? Video: Simon Carswell & Enda O'Dowd 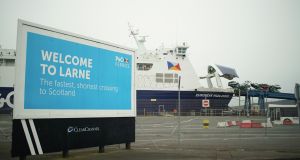 Lorry driver Tony Grady has lost count of the number of times he has taken his truck on the ferry from Scotland to Northern Ireland, but he can remember how many times he has undergone a customs check.

All that may change if the Brexit withdrawal agreement negotiated by UK prime minister Boris Johnson with the EU ever becomes law.

The complex, untested plan to avoid a hard border on the island of Ireland with the UK’s departure from the EU would keep Northern Ireland legally in the UK customs union but practically under EU customs rules.

How that might work is anyone’s guess given that there is little operational detail in the 64-page Brexit “protocol” for Northern Ireland, published ahead of the UK’s planned exit from the EU on January 31st. There is a broad outline: the UK would collect tariffs for Brussels on EU-bound goods moving from Scotland to Northern Ireland, and Northern Irish firms would be able to reclaim tariffs on goods staying in the North.

Pushing a customs border from the land border on the island of Ireland to a border in the Irish Sea has left those who will face the greatest burden of navigating these arrangements – lorry drivers – flummoxed.

“I don’t really see that working. You are not going to hold up a port,” says Grady, as he drives in the darkness of the breaking Scottish dawn towards Cairnryan to catch the 10.30am P&O ferry to Larne.

This sea journey is, at just two hours, the quickest crossing between Ireland and Britain, explaining why roughly 10 per cent of the roll-on, roll-off freight moving between the two islands takes this route.

About 550 lorries crossed on this route on average every day in 2018, according to data gathered by the Irish Maritime Development Office. There are seven sailings every weekday between Larne and Cairnryan.

The branded lorries of Tesco, Asda and Marks & Spencer driving into this small port village reflect its popularity for next-day deliveries, which keep the shelves of the major supermarket chains stocked with fresh produce.

“We will definitely be the most affected if we are going to get held up,” says the Co Antrim-based driver, who is transporting pasta and beans that originated in Italy and are destined for a major supermarket chain.

“Goods are not going to get delivered. Customers may go elsewhere,” he says, adding that traders may decide to move goods destined for the North directly from mainland Europe to the Republic and then across the Border, thereby avoiding Britain.

His food shipment landed in freight containers at the port of Felixstowe on the east coast of England the previous day. The final leg of Grady’s journey started at 5am in Carlisle, 180km south of Cairnryan.

He believes checks could lead to a queue of traffic down the road to a nearby link road where trucks are often parked, with no facilities if bad weather prevents a ferry sailing.

Grady arrives at the check-in kiosk, where a P&O staff member asks the names of the passengers and what kind of goods he is carrying. A minute later he is on his way and the truck is the first in a queue of about 100 lorries.

“They don’t need to know where it has come from – just what’s in it,” he says, driving away from the kiosk.

“I just don’t think it will change. We will still move things but slower. It may just be a day late. Hauliers will just bill people for an extra day.”

The proposed Brexit deal says that nothing in the agreement prevents the UK from ensuring “unfettered access” for goods moving from Northern Ireland to the rest of the UK’s internal market.

Drivers travelling the Cairnryan-Larne route are not so sure. They have little faith in the word of Boris Johnson or his cabinet. In three days after the publication of the proposals, four UK government ministers offered seven different answers to questions about what checks would apply on goods moving from Northern Ireland to Britain.

The government has conceded – much to the anger of Northern Ireland’s unionist politicians – that an exit summary declaration would be required on goods moving west to east if the North followed the EU’s customs code.

For goods going the other direction, from east to west, the government has said customs declarations will lead to extra costs for companies in terms of paying customs brokers. The government estimated this could cost between £15 (€17) and £56 per declaration, depending on whether a Northern Irish company used an external customs agent.

“It will make a mess of the Northern Ireland economy,” says Philip Murphy, a lorry driver from Newry, Co Down, who is hauling animal feed from Hull, a northern English port, to Newtownards near Belfast.

Like other drivers, Murphy cannot see the proposed arrangements working. Most drivers arrive to catch the ferry at the last minute, he says. He believes checks will cause havoc for highly regulated driving time limits monitored by electronic devices in trucks called tachographs.

“Between tachograph rules and everything else you have to go through, to start border checks again, it is not going to work,” he says.

Another driver, sitting in the waiting area of the P&O terminal building at Cairnryan, wonders how they are going to impose an external EU border within the UK.

Murphy is more concerned that fears about potential unrest among republicans reacting to a hard border on the island of Ireland has been replaced by anxieties around the reaction of loyalists to a border in the Irish Sea.

“It would take very little to kick off the Troubles again; something like this here could kick it off.”

Outside the trucker loung on P&O's European Highlander frery, midway between Scotland and Northern Ireland, another lorry driver – who does not want to give his name – has plenty to say about the latest Brexit deal.

“This is the border boat,” he says.

The ferry will be where goods cross the new post-Brexit customs and regulatory frontier, he notes, describing the proposed arrangements as “a disaster”.

Pushing regulatory checks to the Irish Sea to align North and South on EU single market rules, thereby avoiding land border checks, could mean delays up to 24 hours on food deliveries heading to Northern Ireland. He says deliveries will have to be signed off by a veterinary inspector working to EU sanitary rules before being transported.

To guarantee the same supply of agrifood, he estimates that three lorries will be required to do the work two lorries do now, adding to costs. There will also be a mountain of new paperwork to fill out.

'Build a bridge. Boris did talk about building a bridge from Ireland to Scotland and do the checks back in Ireland. With Boris anything is possible'

“It is unworkable but it is going to come. There is going to have to be some way of doing it,” he says.

“Personally I think – and this has nothing to do with politics – a land border would have been better because there is an established routine of doing paperwork between two countries. Now they are making up a whole new set-up and nobody knows what they are doing.”

Grady’s boss, Alan Blair, who runs his own haulage business out of Ballymena, Co Antrim, believes he will be going back in time 20 years if he has fill in paperwork.

He questions why he has to complete any kind of paperwork, even exit declarations listing the contents of his trucks, if one of his lorries transports a load from Belfast to London when Belfast is in the UK.

“It will be an absolute nightmare if we have to fill out paperwork. It has to continue the way it is,” he says.

One of his meat exporters points out that under these new arrangements, he will have to give three days’ notice of exports where his current system involves the sale of produce for next-day delivery.

The proposed arrangements will prove “impossible” for Northern Ireland’s businesses, he says.

Most truckers on the ferry route express puzzlement about how the Brexit plan will work, including hauliers who transport large number of different products known as “groupage”.

One Donegal driver, PJ Carr, who is moving concrete from Letterkenny to Scotland, shrugs his shoulders when asked where his goods might be checked given that there will be no checks at the Irish Border.

Another trucker doubts the plan, too.

“I don’t know if it will work or not, but it will hold the whole process up,” says Ian Duff, who transports engineering parts from Co Antrim to various parts of England on his lorry.

“We have timed deliveries. It will affect everything. Our customers will be complaining.”

He believes checks could be done electronically, rather than through a manual or physical exercise.

More generally, Duff does not like how the deal separates Northern Ireland from the rest of the UK.

“That isolates Northern Ireland. That completely puts us in no-man’s land. The Border is between the North and the South; it is not between Northern Ireland and Scotland or mainland England,” he says.

Duff believes there is a better option.

“Build a bridge. Boris did talk about building a bridge from Ireland to Scotland and do the checks back in Ireland [on the Border],” he says, standing on the deck of the P&O ferry as it approaches the port of Larne.

“With Boris anything is possible,” he says in response to an idea that has been widely dismissed.

Just over two hours after leaving Cairnryan, Tony Grady climbs into the cab of his lorry and, a few minutes later, is driving down the ramp off the ferry.

At Larne he passes two men in luminous yellow jackets, agricultural inspectors who might ask about any fresh fruit or vegetables he transports. He says that in his 20 years driving he has never had a load actually checked here.

At the exit to the port, he does not even have to stop his lorry to give a security guard his exit ticket; he hands the ticket out the window of the passing truck.

“He wants your ticket – that’s it,” says Grady before heading for Ballymena with his load of pasta and beans in tow.