Upgraded M7 to be operating at full-speed by Christmas, TII says 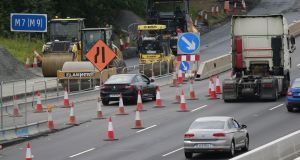 All three lanes of the upgraded M7 motorway in Co Kildare are expected to be in operation with a 120km/h speed limit before Christmas, Transport Infrastructure Ireland (TII) has said. File photograph: Nick Bradshaw/The Irish Times.

All three lanes of the upgraded M7 motorway in Co Kildare are expected to be in operation with a 120km/h speed limit before Christmas, Transport Infrastructure Ireland (TII) has said.

Lanes are currently operating at a reduced speed limit of 80km/h from junction eight Johnstown ato the M7/M9 interchange at junction 11.

TII said the M7 remains an “active construction site” as works on the interchanges are completed and therefore a reduced speed limit is necessary.

“We anticipate all three lanes will be in operation at the 120km/h speed limit by the first or second week of December,” a TII spokesman said.

Construction began on widening a 13.5km stretch of the road in January of last year. It was originally anticipated by the contractors SIAC and Colas that all three lanes would be in operation in both directions by last April.

Since early August, the three lanes have been operating in both directions at a reduced 80km/h speed limit.

GoSafe speed detection vans were deployed to the route last November to ensure motorists were complying with the reduced speed limits. The latest figures from TII show 14,500 speeding fines have been handed out along the road since the works began.

Local District Court Judge Desmond Zaidan and the Courts Service have both raised concerns over how to deal with the increase in cases arising from the speed checks.

The upgrade project also involved the replacement and relocation of the existing ramps at Junction 10 Naas South Newhall to the main Naas Newbridge dual carriageway, the construction of a new interchange at Osberstown and a new Sallins bypass.