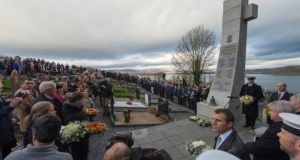 The relatives of 50 persons who died in the Whiddy Island Disaster are applying to the High Court for rectification of the victims’ death certificates.

The French Irish Association of Relatives and Friends of the Betelgeuse say they are making the court application due to what they perceive as the failure of the Irish State to address multiple unlawful safety failings which caused the deaths in Bantry Bay on January 8th, 1979.

They state that, as a result of the successful application under European law by the families of the 1989 Hillsborough Stadium Disaster victims in the UK, they are asking that a coroner’s hearing be reconvened.

When death certificates were originally issued for victims, they simply described the cause of death of each person, such as drowning or asphyxiation.

Relatives hope the coroner will be directed by the High Court to find the deaths unlawful.

They are also seeking a “lengthy, honest, and heartfelt State apology” for the families, workers and rescue services, and the residents of Whiddy Island, who they say were forced into terrible danger due to breaches of safety and the State failure to ensure safe operations.

The relatives are asking that the State apologises to the people of Bantry and West Cork for these failings. And they want the State to carry out a thorough review of Ireland’s maritime and energy regulatory framework, and to implement currently outstanding international maritime regulation.

Michael Kingston, son of victim Tim Kingston, and vice president of the relatives’ organisation said action needs to be taken.

“My father and all those who died, including 43 people from other countries who came to work in Ireland, have been denied their final right under the Right to Life provisions of European law, and their death certificates are incorrect.

They died unlawfully due to the appalling breaches of safety by Gulf Oil, and the failure to address these issues is a fundamental breach of their European rights by Ireland.”

He said they were left to die in atrocious circumstances and the State failed in its duty to ensure safe operations.

“The leaders of the Irish State have failed to show any compassion to the victims’ families, have issued no apology for their clear failings, and have ignored correspondence regarding current safety legislation,” he said.

Eoin Warner, son of victim David Warner, said there has been a shadow of loss and pain over their lives for forty years.

” It’s time to shine a light on that void in our lives, to give our fathers a voice, stolen from them on the 8th of January, 1979.”

Ciarán McCarthy a barrister and master mariner said the tragedy occurred because of the Irish State’s cavalier approach to maritime safety.

The contemporaneous report of the tribunal of inquiry provides damning commentary on the legislative failures and resultant shortcomings, he said.

“Unfortunately, as evidenced by the continued failure by the Irish State to hold to account private and public entities in the years since the disaster and in its continuing disregard for the implementation of important commercial marine safety and fisheries measures, little has been learned.”

At a commemoration last January in West Cork Michael Kingston said the relatives had been ignored by successive Irish governments.

He said he had written to Leo Varadkar in 2016 and before him to his predecessor, Enda Kenny, and to ministers to highlight Ireland’s failure to implement maritime safety legislation. However, he says he failed to receive any replies.