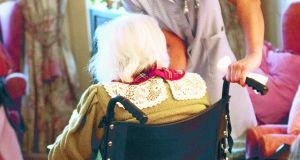 The report noted that non-compliances were having a ‘direct impact on the residents’ quality of life’. Photograph: Michael Donne/Science Photo Library

Twenty-six people working at a nursing home in Enniscorthy, Co Wexford were not appropriately vetted by the Garda for their jobs, an inspection into conditions at the facility has found.

The Health Information and Quality Authority (Hiqa) published 35 inspection reports on Friday on residential centres for older people. Inspectors found evidence of non-compliance in 12 centres in respect of regulations and standards.

Immediate action was taken after inspectors found 26 members of staff at St John’s Community Hospital in Enniscorthy did not have Garda vetting. These staff were not permitted to work until all documentation was in place.

While residents said they were happy overall with the service at the centre, the report noted that non-compliances were having a “direct impact on the residents’ quality of life” and that improvements were needed to ensure the rights, privacy and dignity of residents were respected.

Inspectors highlighted that several staff continued to refer to residents as patients and that one resident believed she was in hospital.

At East Ferry House in Midleton, Co Cork, inspectors noted high levels of non-compliance with regulations, and found the owner had repeatedly failed to ensure there was an effective cleaning system in place.

Training on the prevention of elder abuse, medicine management and behavioural challenges was out of date

The report found shelves in the food storage areas were unclean, there was rust on kitchen furniture and the treatment room contained out-of-date medical preparations and old equipment. Risk management was found to be “not robust” and there was no risk register in place.

Records were not easily retrievable or accessible in the centre, and inspectors noted the absence of a complete staff file for the person in charge. The roster was not accurately maintained, while a number of staff rostered to work were not in the centre on the day of the inspection.

Staff were not given mandatory training, while training on the prevention of elder abuse, medicine management and behavioural challenges was out of date.

Only one staff member was found to be on duty at night even though one resident required two people to support their care and movement needs. Adequate precautions had not been taken against the risk of fire, Hiqa found.

The report criticised those running the centre for “inadequate responses” following previous inspections and failing to take the necessary measures to ensure the service was safe, appropriate, consistent and effectively monitored.

It found that “significant action was required on the part of the management” to ensure full regulatory compliance.

Fire safety regulations were also found not to be fully complied with on the day of an inspection at Lystoll Lodge in Skehenerin, Listowel, Co Kerry, despite calls for improvements following an earlier inspection. The centre’s provider had previously committed to having all fire safety works completed by the end of March.

Inspectors carrying out an unannounced inspection on April 2nd last found that residents were “not protected from the risk and impact of fire in some areas of the building” and that arrangements were not in place to evacuate residents from the west and east wings of the lodge.

With construction work still ongoing, inspectors found they could not fully review fire safety precautions and management at the centre along with potential risks to residents. Fire doors had been updated and found to be in good condition but smoke seals were missing from the staff room door and loose heat and smoke seals on the lounge door prevented it from closing fully. Inspectors also warned of the risk of storing combustible material along escape routes.

While it was evident that the provider had made “significant progress” in relation to the programme of fire safety works, a number of risks remained outstanding, said the report.