What trends to look out for in the local elections 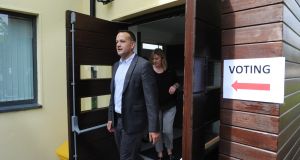 Taoiseach Leo Varadkar after voting in Scoil Thomais in Castleknock, Dublin. His Fine Gael party is hoping to make gains in the local elections, although party figures do not expect it to overtake Fianna Fáil as the largest party in local government. Photograph: Aidan Crawley

While much of the attention of the past few weeks has centred on the outcome of the European elections, the local elections are regarded as a more accurate harbinger of what could happen in the next Dáil contest.

Personalities dominate the drive for seats in the European parliament, while the campaigns to fill councils are impacted by more prosaic matters.

The main parties will be watching a number of areas as votes are counted this weekend to discern patterns that could illuminate their strengths and weaknesses across the country.

Fine Gael is hoping to make gains, although party figures do not expect to overtake Fianna Fáil as the largest party in local government.

Its poor showing in Cork in 2014 was an early indicator of the bad Munster performance that followed in the general election two years later.

On Cork County Council, party sources say Fine Gael can increase its representation and fill between 16 and 21 of the 55 seats. Targets include getting two councillors elected in Clonakilty/Skibbereen – where Fine Gael currently has no councillors – and it is also aiming for three seats in the Bandon/Kinsale and Macroom wards.

On Cork City Council, Fine Gael has one councillor north of the Lee and four south of it. It wants to increase that to three and five respectively.

Away from Cork, it wants to copper-fasten its hold on the middle classes by getting two seats in the Clontarf ward of Dublin City Council with Naoise Ó Muirí and new candidate Jeff Johnston. It also wants three out of six seats in the Blackrock ward on Dún Laoghaire-Rathdown County Council.

Donegal is also slated for gains – from six seats to nine – by Fine Gael insiders.

Two counties in particular – Sligo and Offaly – are being watched as potential windows into the mood of rural voters. The party only won three seats on each council in 2014, and improvement on both is seen as a must.

The contest between Fine Gael TD Noel Rock and Fianna Fáil’s Paul McAuliffe in Dublin North West will be one of the key battles of the next general election. McAuliffe, a sitting Dublin city councillor, wants to bring in running mate Keith Connolly in the Ballymun-Finglas ward this weekend as he builds towards his Dáil challenge.

The election of Michael Watters or Ammar Ali in the South West Inner City would be good news for Senator Catherine Ardagh, who is standing in the Dublin South Central Dáil constituency.

Councillor Cormac Devlin in Dún Laoghaire will want to bring in his running mate, Justin Moylan, to show he too is a Dáil contender.

Others running in the locals in Dublin before standing for the Dáil include Mary Fitzpatrick in the Cabra-Glasnevin ward of Dublin City Council and Olivia Buckley in the Dundrum ward of Dún Laoghaire-Rathdown.

Fianna Fáil wants to increase its support in working class areas of Dublin such as Ringsend, and Elizabeth Watson’s vote in the southeast inner city will be an indication of success or failure in that endeavour. Winning two seats out of six in Clontarf -–with Cathal Haughey hoping to join Deirdre Heney on the city council – would provide a boost in a middle-class area.

The party only won five out of 40 seats on South Dublin County Council in 2014, but it has since recruited two sitting councillors to its ranks. It will hope its seven outgoing councillors are joined by at least another three. There is said to be less scope for growth on Fingal County Council.

Sinn Féin is hoping to maintain its existing base at local authority level. Other parties report that its electoral appeal is nowhere near its level of 2014, when the local elections took place at the height of controversy over water charges and austerity.

“It’s a good day if you are holding your own and improving a wee bit,” said a party strategist, who added that gains could come in Cork city with Eolan Ryng and Mandy O’Leary, as well as in Dungarvan in Waterford with Conor McGuinness.

Winning a seat on Longford County Council – the only county on the island were Sinn Féin has no elected representative – is seen as key. Sinn Féin’s most ambitious target is to take three out of six seats in the Tralee electoral area, but Mary Lou McDonald will be happy with consolidation across the country.

McDonald’s leadership has not delivered the increase in popularity many in Sinn Féin hoped for, and the party will watch the share of first-preference votes as much as the number of councillors elected.

The local elections are a big test of Brendan Howlin’s efforts to revive the fortunes of the Labour Party. Its seven TDs and four Senators have been tasked with bringing it at least one extra councillor on their respective local authorities as they seek to strengthen the party’s position in constituencies where it has Oireachtas representation.

Labour is targeting seats in four wards – the southeast inner city, Ballyfermot-Drimnagh, the north inner city and Donaghmede – of Dublin City Council where it currently has none.

Additional seats on Westmeath County Council would also help the party retain its Dáil seat for Longford-Westmeath as party stalwart Willie Penrose retires at the next general election.

The performance of Michelle Hall in the Drogheda Rural ward of Louth County Council will indicate if local senator Ged Nash’s efforts to return to the Dáil are on track.

Green Party leader Eamon Ryan wants to increase the number of Green councillors from 12 to at least 25. Success is likely in middle-class Dublin. For example, the Greens hope to return a councillor in each of the six Dún Laoghaire-Rathdown County Council wards. The party currently has two councillors on the entire council.

With talk of a Green surge, Ryan also wants to build the party nationally and not just in the urban centres of Cork, Waterford, Limerick and Galway.

The election of candidates such as Róisín Garvey in the Ennistymon ward of Clare; Pippa Hackett in Edenderry, Offaly; Louise Heavin in Athlone, Westmeath; Bláithín Gallagher in Manorhamilton, Leitrim; and Marc Ó Cathasaigh in Tramore, Waterford, would show that a Green tide is not just an urban, middle-class fad.

The Social Democrats, in its first local election campaign, hopes to add to the seven councillors it has recruited since it began in 2015. It is hopeful Anne Marie McNally will be elected in Lucan, along with Sharon Nolan in Galway city, Sarah Jane Hennelly in Limerick, and Sinead Halpin in Cork city. The party will need a successful outing to prove it has a viable future.

Independent candidates aligned to TDs – such as Damien O’Farrell in Clontarf, Dublin, who works for Finian McGrath – will be watched to see if their performances hold any clues for the future prospect of Independents who entered Government.

Figures in the main parties believe 2014 was the high water mark of the harder left parties, and the council results will indicate if they are correct.