Voting on Friday took place in more than 6,500 polling stations across the country

President Michael D. Higgins and his wife Sabina cast their votes - in the European and local elections, as well as the divorce referendum - at St. Mary's Hospital in Dublin's Phoenix Park. Video: John Cassidy 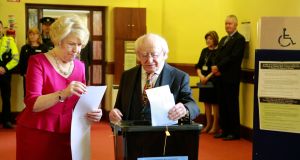 President Michael D Higgins and Sabina Higgins have cast their vote this morning at St Mary’s in the Phoenix Park. Photograph: Nick Bradshaw 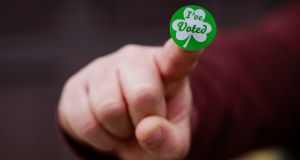 The polls have closed in the local and European elections and in the referendum on divorce.

More than 6,500 polling stations across the country opened at 7am on Friday for the votes, and remained open until 10pm.

Residents on remote Atlantic islands off the coasts of Donegal, Galway and Mayo cast their votes a day early on Thursday.

European and local council elections were held in the Republic on Friday alongside a referendum on divorce laws – with a Yes set to reduce the lengthy period separated couples have to wait before they can obtain a formal divorce.

The couple spent a number of minutes casting their votes from the long list of candidates.

Taoiseach Leo Varadkar voted at about midday at his local polling station in Castleknock. After marking the ballot papers, he joked to reporters: “I really had to think about the transfers.” Sinn Féin leader Mary Lou McDonald voted at St Joseph’s School on the Navan Road in Dublin. In Cork, Fianna Fáil leader Micheál Martin was accompanied by his wife Mary and their children Micheál A and Aoibhe as they all cast their votes at St Anthony’s Boys National School in Ballinlough.

Counting in the local elections and divorce referendum will begin on Saturday morning.

In the European elections, two of the 13 elected face an uncertain wait as to when they can take their seats due to the Brexit delay.

The Republic is receiving two of the 27 places formerly reserved for the UK which are being redistributed among 14 member states.

The UK is participating in the poll, with British MEPs set to attend the inaugural plenary session of the new parliament on July 2nd.

As a result, those elected in last place in Ireland’s Dublin and South constituencies must wait to see if they can take their seats.

The European election count for Ireland’s three constituencies – Dublin, South, and Midlands-North-West – will commence on Sunday morning at centres in Dublin, Cork and Castlebar, Co Mayo.

A Europe-wide embargo means the first results in that poll cannot be declared until 10pm that night. If previous elections are a guide, counting is likely to continue through into Monday.

Counting in the mayoral plebiscites is likely to get under way in the three impacted cities on Monday.

The European and local government elections are the first electoral test for the State’s main parties since the inconclusive general election of 2016. While Friday’s elections focus on European and council issues, the results will no doubt be interpreted as a public judgment on Fine Gael’s performance in government and how effectively Fianna Fáil has managed the delicate balancing act of holding an administration to account while at the same time propping it up.

Other parties, including Sinn Féin, the Green Party and Labour, will hope to be the beneficiaries of any potential public disaffection with “new politics”.–PA