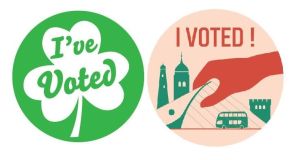 Two of the sticker designs to be used at Dublin polling stations on Friday as part of the ‘I’ve Voted’ initiative.

But on Friday voters in Dublin will be able to pick up similar stickers at polling stations when casting their ballots, as part of a drive to encourage turnout.

The I’ve Voted project will feature small stickers designed by Maser, the artist famed for his Repeal the Eighth mural during the abortion referendum, as well designs by Jacek Matysiak and Jacky Sheridan.

The project is being run by transparency campaigner Liz Carolan, and Irish Times columnist Una Mullally, with support from the Dublin Inquirer newspaper, and is funded by the European Parliament information office in Dublin.

The stickers will be available at 122 polling stations across the Dublin city area.

Campaigners running the pilot project hope that if successful, it could be rolled out on a national basis during the next general election.

“We’re encouraging voters to wear their stickers with pride, and post an image on social media, using the hashtag #thistimeimvoting,” Ms Mullally said.

“The stickers are not affiliated with any political party, campaign, or movement, but designed to remind people to get to the polls, and express pride in participating in these crucial elections,” she said.

The project, which will be pushed on social media on Friday, is hoped to increase traditionally lower voter turnout among young people.

“In 2014, turnout for the European Parliament elections was the lowest ever across the European Union. Just 21 per cent of young people in Ireland between the ages of 18 and 24 turned out to vote in 2014,” Ms Mullally said.

Voting in the European and local elections, and in the referendum on divorce, will take place between 7am and 10pm on Friday.