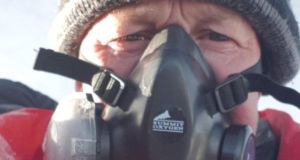 An Irish father of two has died during a climb on Mount Everest.

Kevin Hynes (56), from Galway, was part of a group from the climbing company 360 Expeditions attempting to scale the mountain’s summit, which stands at 8,848m.

Mr Hynes was attempting to scale the world’s highest mountain from the Tibetan side on Friday morning.

The Galway man’s death comes a week after Séamus (Shay) Lawless, from Bray, Co Wicklow, went missing after falling up to 500m from the balcony area of Everest in temperatures of -27C.

A recovery operation for Mr Lawless, a professor at Trinity, was stood down on Friday. Mr Lawless had successfully reached the summit of the mountain just hours before his fall.

In a statement, 360 Expeditions said: “Kevin (56) was one of the strongest and most experienced climbers on our team and had previously summited Everest South and Lhotse.”

A Department of Foreign Affairs official said: “The department is aware of reports of the death of an Irish citizen on the north slopes of Mount Everest. We stand ready to provide consular assistance.”

Kevin had reached Camp III at 8,300m on Wednesday.

The climbing company’s statement added: “Yesterday, while our summit climbers were heading higher, Kevin started his descent. He was accompanied by experienced guide, Dawa Sangee, who himself has summited Everest South twice, Everest North and Makalu twice.”

According to the Himalayan Times, Kevin passed away in his tent at the North Col at 7,000m in the early hours of this morning local time.

“His wonderful wife, Bernadette, and two children, Erin and James, are comforted by all the communication that Kevin sent out from his expedition, letting them know that this was probably the most fun he had had on any one of his expeditions, the team was amazing and that he was loving being with [mountaineer] Rolfe Oostra.”

Efforts are under way to bring his body to base camp, officials at base camp said.

Pat Falvey, one of Ireland’s leading mountaineers and adventurers, who is the only Irish person to successfully ascend Mount Everest from the north and south faces twice, said: “I can confirm that Mr Hynes died on Mount Everest. It appears so far and from speaking with officials in Nepal that he died from altitude sickness.

“There are more Irish people dying on Everest than any other nationality . . . This news is just tragic.”

Mr Falvey added with regard to recovery efforts for Mr Lawless that “the family have confirmed to me that if his body is found he will be buried on the mountain”.

Mr Lawless’s family announced on a GoFundMe crowdfunding page for the search for him that the operation had been called off.

In a post on the page, the family thanked all of those who had donated and expressed gratitude for the “huge outpouring” of support over the past couple of days.

“The GoFundMe campaign was instrumental in helping us fund an experienced search team for Shay. Unfortunately it was not successful.

“While the experienced search team has made every effort to locate Shay, the extremes of operating at high altitude and the sheer range of the search area ultimately proved too difficult and based on expert advice we have decided to call off the search rather than risk endangering anyone’s life in the treacherous conditions.”

The recovery operation for Mr Lawless was being led by Co Down man Noel Hanna from Seven Summit Treks company and another eight skilled climbers.

The family had said they had been forced to look for donations as the insurance company which provided a policy for Mr Lawless was currently not providing assistance with the search and rescue operation.

In a statement, Trinity College Dublin said: “The tragic death of our friend and colleague, Séamus (Shay) Lawless, has come as a huge shock to all of us.

“On behalf of everyone at Trinity College Dublin and the research centre, ADAPT, we want to offer our condolences to his wife, Pam, and their daughter, Emma, and to his large family, all his friends, students and colleagues.

“As a colleague and as a friend, Shay’s enthusiasm, his creativity and his approach to his work was inspirational.”

The college said a memorial service would be held for Mr Lawless in the coming weeks.