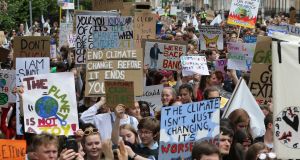 Thousands of young Irish students calling on the Government to back its demands on addressing the climate crisis facing the planet took to the streets at lunchtime on Friday. This is the second national protest led by secondary school pupils.

The biggest event was held at Merrion Square in Dublin, where about 3,000 people protested.

The second-largest protest was outside Cork City Hall, where the student Saoi O’Connor from Skibbereen has been leading “Fridays For Future” gatherings since early January.

In addition, many schools, supported by teachers and parents, held smaller events in solidarity with a global day of action led by the Swedish teenager Greta Thunberg.

Across the world, some 1,400 marches were staged in more than 120 countries – with indications numbers were set to exceed the previous schools strikes for climate global action in early March, when an estimated 1.6 million people took part.

The protests in Ireland have been supported by environmental and climate NGOs, and civil society organisations including Siptu, TUI and students’ unions at third level; many of their members attended today’s gatherings.

The movement is co-ordinated by a number of student groups – notably Schools’ Climate Action Network (SCAN) and Fridays For Future Ireland – who organise and agree climate demands through social media.

Since that protest the Government has agreed to one of the demands of the Irish protesters, the declaration of “a national climate and biodiversity emergency”. It has also endorsed the recommendations of a landmark report from an all-party Committee on Climate Action, and is about to publish its major response in the form of an all-of-Government plan to tackle climate disruption.

SCAN’s other demands included an end to future fossil-fuel extraction; reform of the education system to address the need for ecological literacy and embracing active steps to achieve climate justice.

The students also called for stronger regulation of “corporations that are causing the climate crisis” and “a transformation to reduce emissions from agriculture in Ireland”.

It has reiterated this week its demand for a green new deal that ensures all young people in Ireland “can have livelihoods that don’t damage the Earth” after leaving school.