Racism on the campaign trail: ‘One guy said all migrants are cancer’ 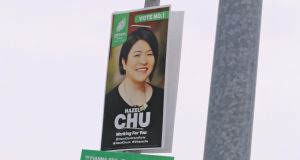 Hazel Chu of the Green Party: ‘No matter what I do I will never be Irish to some people.’ Photograph: Nick Bradshaw

Candidates running in the upcoming local elections from immigrant backgrounds have described receiving racist messages online, experiencing anti-immigrant sentiment on doorsteps, and having their posters torn down.

Joe Loughnane, a People Before Profit candidate in Galway city, whose mother is from Pakistan, said he had received racist abuse online.

“I did have one incident canvassing where a man opened the door and all he said was ‘I won’t be voting for a foreigner’,” Mr Loughnane said. Commentary is harsher online, where he has received messages calling him the N-word, he said.

Mr Loughnane, who grew up in Galway, said the anti-immigrant commentary online had grown worse in recent months. “It is disappointing, but at the same time we’re not shocked by it,” he said.

Yousuf Janab Ali, an Independent local election candidate in west Cork, was out canvassing recently when he noticed several of his posters were missing from lamp posts.

More than 20 posters he put up were removed, while other candidates’ posters on the same poles remained intact, he said. “I’m not disappointed but I’m a little bit upset,” he said.

Hazel Chu, running for the Green Party in Pembroke, south Dublin, was born in Ireland, but her parents are from Hong Kong.

“There has been a lot of online trolling. There are a couple of doors [where people have said] that I’m not Irish,” she said.

The commentary and abuse on social media has been particularly bad in recent months, she said. “One guy said that all migrants are cancer, and they [should] be killed off like cancer,” Ms Chu said.

“People say it is just a small group of people, but that small vocal minority is gathering movement,” she said. “My parents came over here and worked their asses off. I was born and raised here, but no matter what I do I will never be Irish to some people,” she added.

The racist abuse online appeared to be becoming “more organised”, with individuals being targeting by groups, she said.

In Tallaght, Sandra Ruiz is running for election for the Social Democrats, having moved to Ireland from Spain.

Often when out canvassing, people will “go straight to my accent and ask where I’m from,” she said. On a doorstep with an Irish member of her campaign team, often the resident will direct any policy questions to them, rather than her, Ms Ruiz said.

Imran Khurshid, from Pakistan, who is a Fianna Fáil candidate in Dublin’s north inner city, said: “Overall I would say it’s very good, people are accommodating and listen to you … I find people are ready for diversity,” he said.

But there have been incidents of anti-immigrant abuse online, including in one case after he posted on Twitter about the 1916 Rising anniversary. “I was bombarded with all these messages, saying I’m ‘paper Irish’,” and that he had no right to speak about the Easter Rising, he said.

Anti-immigration views have also been raised on the campaign trail with white Irish election candidates. Mary Seery Kearney, a Fine Gael local election candidate in the Rathfarnham-Templeogue ward, said she had walked away from three doors where residents “expressed open hatred of anyone coming into the country”, she said.