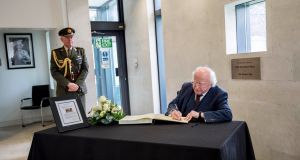 President Michael D Higgins signing the book of condolence for victims of the London attack at the British embassy in Dublin. Photograph: Brenda Fitzsimons

President Michael D Higgins and Taoiseach Enda Kenny have signed the book of condolences at the British embassy for the victims of Wednesday’s Westminster terror attack.

On Friday, President Higgins wrote in the book: “President of Ireland offering sympathy to the families of those killed and the injured.”

Afterwards, he spoke to the French ambassador, Jean-Pierre Thébault, who also signed the book.

President Higgins said: “It is very important to see it as the criminal act that it is, affecting citizens going about their orderly business of working in the public space.”

He also expressed a desire that any reaction to the attack “doesn’t fit into the agenda of those who take such criminal action”.

He added in English: “My sympathy is to the families of those who lost loved ones and my support from the Irish Government to the prime minister and her government arising from the tragic events in London.”

The table on which the book of condolences has been placed also contains a framed message from British prime minister Theresa May.

The message states: “An act of terrorism tried to silence our democracy, but today we meet as normal, as generations have done before us.”

The British ambassador to Ireland, Robin Barnett, said he was “deeply honoured” that the President had come to express his condolences following the attack, in which five people were killed and 20 others were injured.

“Since the incident first broke, we have been inundated with people expressing support and sympathy,” he said.

“We are deeply grateful to the President for joining us here in the embassy in a formal way.

“We are very aware that the people of Ireland have joined with the people of the UK, reflecting the very special and unique bonds that exists between our two countries.”

The book of condolences for the victims of the Westminster attack is open between 10am and 4pm until March 27th at the British embassy, Merrion Road, Dublin.