Westminster attack: the dead and wounded from 10 nations

Irish woman among 40 injured in attack in London 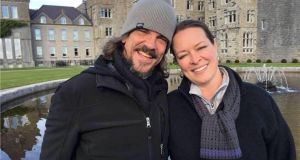 Kurt Cochran and his wife Melissa are shown in this photo released by the family in Salt Lake City, US. Mr Cochran was killed and his wife badly injured during Wednesday’s attack in London. Photograph: Payne family/via Reuters

One was a veteran police constable with the Metropolitan Police force in London. A second was a teacher who, according to reports, was walking from her school when she was mowed down by a sport utility vehicle on Westminster Bridge. Another was a man from Utah who was on vacation with his wife, celebrating their 25th anniversary.

They were all killed by an assailant who ploughed into pedestrians on the bridge, crashed his vehicle into a fence and then emerged with knives, injuring at least 40 others in the heart of the city. Among the wounded, many of them foreign tourists, were 12 Britons, four South Koreans, three French high school students, two Romanians, two Greeks and one citizen each of China, Germany, Ireland, Italy and the United States.

On Thursday afternoon, police identified the assailant, who was fatally shot by the police, as Khalid Masood, (52). UK prime minister Theresa May said in parliament that the suspect was British-born and was previously investigated by MI5, Britain’s domestic counterintelligence agency, for possible ties to violent extremism.

The prime minister visited victims at a hospital in London for 40 minutes on Thursday, according to her office. Many of them had not been publicly identified. At a news conference, Mark Rowley, the assistant police commissioner, cited both the police investigation and the need to notify family members as reasons. But information has dribbled out.

The police constable was 48, a 15-year member of the Parliamentary and Diplomatic Protection Command, and was patrolling the Parliament building when the assailant fatally stabbed him. Tributes for Palmer have poured in.

“He was someone who left for work today expecting to return home at the end of his shift, and he had every right to expect that would happen,” Rowley said in a statement. Mayor Sadiq Khan said, “Keith Palmer was killed while bravely doing his duty – protecting our city and the heart of our democracy from those who want to destroy our way of life.”

James Cleverly, a Conservative MP, said on Twitter that he had served in the Royal Artillery with Palmer, calling him “a lovely man, a friend.”

On Thursday, the Metropolitan Police announced in a Twitter post that his badge number would be retired.

An American travelling in Europe with his wife, Melissa Payne Cochran, died of injuries sustained in the attack, according to a statement from the family issued through the Church of Jesus Christ of Latter-day Saints in Salt Lake City.

It was not immediately clear if he was the third, unidentified person in his mid-50s who died in the attack. Clint Payne, Cochran’s brother-in-law, said in the statement: “Our family is heartbroken to learn of the death of our brother- and son-in-law, Kurt W Cochran, who was a victim of Wednesday’s terrorist attack in London. Kurt was a good man and a loving husband to our sister and daughter, Melissa. They were in Europe to celebrate their 25th wedding anniversary, and were scheduled to return to the United States on Thursday.”

Cochran’s wife was also wounded in the attack, and she was hospitalized with “a broken leg, a broken rib and a cut on her head,” said her sister Sarah Payne-Mcfarlane in a post on Facebook. Their parents were serving as missionaries in London, according to the church.

The couple ran a recording studio in West Bountiful, Utah, and Cochran had shared pictures of their stops in Germany and Scotland.

Frade’s mother immigrated to Britain from Betanzos, a Galician town in northwestern Spain. Frade’s two sisters run the Academia Notting Hill language school in Betanzos and live in a village nearby. Her father is of Turkish Cypriot descent, a family friend said.

On Thursday, the Betanzos town hall held a moment of silence at noon to honour Frade. Local leaders decreed three days of mourning. Frade was a British citizen, but “her link with our town was always very strong,” José Luis Pariente, a Betanzos town hall official, said by phone. “She came back here to visit every summer.”

Amy Winter, the family friend and a neighbour in the Notting Hill district of London, said on the phone: “When I think of Aysha, I think of her radiant smile. She always cheered people up.”

“It crushes me to know that she was going to pick up her girls when she was killed,” she said, adding, “They were everything to her.”

Rachel Borland, the principal of DLD College London, said in a statement: “We are all deeply shocked and saddened at the news that one of the victims yesterday was a member of our staff, Aysha Frade. All our thoughts and our deepest sympathies are with her family.”

The Irish Times understands that the Irish woman injured in the attack on Westminster Bridge remains in hospital, where she is being treated for “non-life threatening” injuries. The Irish embassy in London said it is in contact with the relevant authorities and stands ready to provide the woman with support.

Three of the wounded were 10th-grade boys from France who were on the bridge with other visiting students. The three attended St Joseph high school in Concarneau, Brittany, according to the French Foreign Ministry.

The mother of one of the injured students told French news media that he had borrowed a friend’s cellphone to text that he was okay. “His phone didn’t work, but he must have known I would try to reach him because I immediately got a text message from him,” the mother, Isabelle Calvez, said on French television. “He told me he was okay, but had the incident happened 20 seconds later, he would’ve been hit by the car.”

She added that two of the other students had fractured arms and legs, while another had a neck injury.

On Thursday, the French Education Ministry said that the injured students from Brittany had been treated and that their conditions were no longer life-threatening. Juliette Meadel, government minister for victims’ affairs, told CNEWS that the three students were among a group of 56 that went to a nearby hostel after the attack. A second group from the high school, with 36 students, was in another location in London when the attack occurred. Meadel said the uninjured students would return to France on Thursday.

There are more than 4,200 students in London on school trips from France, according to the Education Ministry. Most of the other planned school trips to London on Thursday or Friday have been postponed.

Prime Minister Bernard Cazeneuve of France expressed solidarity with “our British friends” hurt in the attack and offered “full support to the injured French pupils, their families and their classmates.”

Five South Koreans were among the 29 people hospitalised. They were injured when they were mobbed by a crowd fleeing the attack site, according to the South Korean Foreign Ministry. Four of them – three women and a man in their 50s and 60s – sustained fractures and other injuries that were not believed to be life-threatening. A 67-year-old woman, however, suffered a head injury when she was pushed by the fleeing crowd, according to South Korean news reports. She later had surgery to treat her injuries.

The two Romanian victims, Andrei Burnaz, (32), and Andreea Cristea, (31), are from the Black Sea port city of Constanta, according to the Romanian news agency Mediafax, which quoted an official as saying they were in London to celebrate Burnaz’s birthday.

At least three of those injured after being “driven at by a vehicle” were members of the police force, and were in stable condition. A woman who was “an Australian permanent resident” was among the wounded, according to the Australian government. News outlets there reported that the assailant’s vehicle had run over her foot on the bridge. The woman, originally from Germany, lives in South Australia, according to an Australian news report.

Two Greeks were hospitalised for minor injuries, according to the Greek Embassy in London.

1 Six counties free of new cases of Covid-19 over past week
2 Gardaí disperse crowds gathered at coastal beauty spots
3 How lockdown has helped us to save money - and find new ways to spend it
4 Cabinet to decide on Friday if travel curbs can be lifted early
5 George Floyd death: sweeping protests see curfews in 22 US states
Real news has value SUBSCRIBE