White House press secretary Sean Spicer insists that there is no plan B for US president Donald Trump as he aims to repeal Obamacare. Video: The White House/Reuters 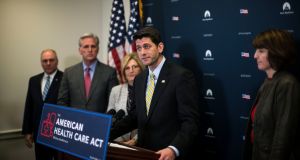 US House of Representatives speaker Paul Ryan speaks on the proposed American Health Care Act along with other Republican leaders during a news conference in Washington on March 15th. Photograph: Gabriella Demczuk/New York Times

US president Donald Trump suffered a stunning political setback on Friday in a Congress controlled by his own party, when Republican leaders pulled legislation to overhaul the US healthcare system, a major 2016 election campaign promise of the president and his allies.

Republican leaders of the House of Representatives pulled the legislation to repeal and replace Obamacare due to a shortage of votes, despite desperate lobbying by the White House and its allies in Congress, ensuring that Mr Trump’s first major legislative initiative since taking office on January 20th ended in failure.

House Republicans had planned a vote on the measure after Mr Trump cut off negotiations with Republicans who had balked at the plan late on Thursday and issued an ultimatum to vote on the bill on Friday, win or lose.

Republican moderates as well as the most conservative politicians had objected to the legislation.

The White House and House leaders were unable to come up with a plan that satisfied both moderates and conservatives, despite Mr Trump’s vaunted image as a dealmaker.

Amid a chaotic scramble for votes, House of Representatives speaker Paul Ryan, who championed the bill, met with Mr Trump at the White House on Friday, before the bill was pulled from the House floor after hours of debate.

Mr Ryan said he recommended that the legislation be withdrawn from the House floor because he did not have the votes to pass it, and that Mr Trump agreed.

Mr Trump sought to shift the blame to the Democrats, who were unified in their opposition to the bill, even though his party controls the White House, the House and the Senate.

“There were things in this bill that I didn’t particularly like,” Mr Trump added, without specifying what those were.

“Perhaps the best thing that could happen is exactly what happened today, because we’ll end up with a truly great healthcare bill in the future after this mess known as Obamacare explodes,” Mr Trump said.

“I will not sugarcoat this. This is a disappointing day for us,” Mr Ryan said at a news conference on Friday after the legislation was pulled, adding that his fellow Republicans are experiencing what he called “growing pains” as they transition from an opposition party to a governing party.

“Doing big things is hard,” Mr Ryan added, noting that he got close but failed to muster the 216 votes needed to pass the bill.

Ryan said he did not know what the next steps would be on healthcare, but called Obamacare so flawed that it would be hard to prop up.

Without the bill’s passage in Congress, the 2010 Affordable Care Act - known as Obamacare - remains in place, despite seven years of Republican promises to dismantle the the signature domestic policy achievement of Mr Trump’s predecessor, Barack Obama.

Repealing and replacing Obamacare was a top campaign promise by Mr Trump in last year’s presidential election, as well as by most Republican candidates.

The failure to pass the healthcare bill in the House on Friday called into question Mr Trump’s ability to get other key parts of his agenda, including tax cuts and a boost in infrastructure spending, through Congress.

“There’s nobody that objectively can look at this effort and say the president didn’t do every single thing he possibly could with this team to get every vote possible,” White House press secretary Sean Spicer told reporters before the legislation was pulled.

Mr Trump already has been stymied by federal courts that blocked his executive actions barring entry into the US of people from several Muslim-majority nations.

Some Republicans worry a defeat on the healthcare legislation could cripple his presidency just two months after the wealthy New York real estate mogul took office.

In a blow to the bill’s prospects, House appropriations committee chairman Rodney Frelinghuysen had announced his opposition, expressing concern about reductions in coverage under the Medicaid insurance programme for the poor and the retraction of “essential” health benefits that insurers must cover.

“We need to get this right for all Americans,” Mr Frelinghuysen said.

Republican representative Dana Rohrabacher said before the bill was pulled that voting it down would be “neutering Trump” while empowering his opponents.

“You don’t cut the balls off a bull and then expect that he can go out and get the job done,” Rohrabacher told Reuters.

“This will emasculate Trump and we can’t do that . . . If we bring this down now, Trump will have lost all of his leverage to pass whatever bill it is, whether it‘s the tax bill or whatever reforms that he wants.”

Mr Trump and House Republican leaders could not afford to lose many votes in their own party because Democrats were unified in opposition, saying the bill would take away medical insurance from millions of Americans and leave the US healthcare system in disarray.

Republican supporters said the plan would achieve their goal of rolling back the government’s “nanny state” role in healthcare.

Obamacare boosted the number of Americans with health insurance through mandates on individuals and employers, and income-based subsidies.

About 20 million Americans gained insurance coverage through the law.

The nonpartisan Congressional Budget Office said that, under the proposed Republican legislation, 14 million people would lose medical coverage by next year and more than 24 million would be uninsured in 2026.

Days of negotiations involving Republican politicians and the White House led to some changes in the bill but failed to produce a consensus deal.

It also would end Obamacare’s expansion of the Medicaid state-federal insurance programme for the poor, cut future federal Medicaid funding and let states impose work requirements on some Medicaid recipients.

House leaders agreed to a series of last-minute changes to try to win over disgruntled conservatives, including ending the Obamacare requirement that insurers cover certain “essential benefits” such as maternity care, mental health services and prescription drug coverage.