Westminster attacker named, he was not under investigation

A video filmed by David Davies, a British MP, on his mobile phone shows scenes of panic inside the parliament building during the attack on Westminster. Video: Reuters 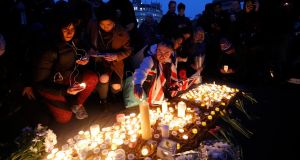 The man who killed three people in an attack at Westminster on Wednesday has been named as Khalid Masood, a 52-year-old Englishman. Police said he had most recently lived in the west midlands and had a number of criminal convictions.

“Masood was not the subject of any current investigations and there was no prior intelligence about his intent to mount a terrorist attack. However, he was known to police and has a range of previous convictions for assaults, including GBH [grevious bodily harm], possession of offensive weapons and public order offences,” the metropolitan police said.

His first conviction was in November 1983 for criminal damage and his last was in December 2003 for possession of a knife, but he had never been charged with terrorism offences. The Islamic State terror group claimed responsibility for the attack, describing Masood as one of the group’s “soldiers”, but the claim has not been verified.

“It is still our belief, which continues to be borne out by our investigation, that this attacker acted alone and was inspired by international terrorism,” the police said. 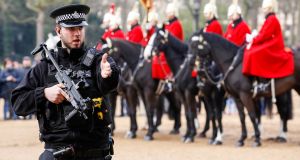 Gallery: The day after

Masood drove a car into pedestrians on Westminster bridge, killing two and injuring 40, before rushing through the gates of parliament, where he stabbed 48-year-old policeman Keith Palmer to death, before being shot dead by plain-clothes officers.

The two dead pedestrians have been named as Aysha Frade, a London college administrator in her 40s, and Kurt Cochran, an American tourist in his 50s. Cochran and his wife Melissa, who was seriously injured in the attack, were in London to celebrate their 25th wedding anniversary and were due to return to the United States on Thursday.

Prime minister Theresa May told MPs on Thursday that Masood had come to the attention of MI5 a number of years ago as a “peripheral figure” in violent extremism, but there was no intelligence about his plan to attack parliament. Home secretary Amber Rudd on Thursday night denied that an intelligence failure had allowed the attack to happen.

“I think that would be absolutely the wrong judgment to make. I’m confident that as we get more information – and I really can’t be drawn any further on it at the moment – that we will learn more and take comfort from the information that we have and the work that the intelligence services do,” she told the BBC’s political editor Laura Kuenssberg.

“It is hard for them because they operate with a large degree of secrecy, for good reasons. I would urge everyone to give them the space to do the inquiries that they need.”

“All I can tell you is what the police have said so far, which is that he was someone known to them, but that he was on the periphery of the intelligence agencies. I think we’ll hear more from them in due course, but we have to remember that this man was known to them partially because he had been in jail, but not for terrorist offences,” she said.

Although police said they were confident that Masood was the sole attacker on Wednesday, counter-terrorism detectives are investigating whether he was part of a wider conspiracy. They continued to search a number of houses on Thursday night, after they arrested seven people in Birmingham and one in London in raids on Wednesday night and Thursday morning.