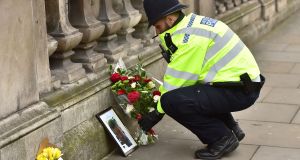 A police officer places flowers and a photograph of PC Keith Palmer on Whitehall near the Houses of Parliament in London. Photograph: Dominic Lipinski/PA Wire 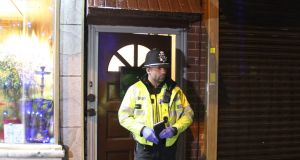 A police officer stands outside an a property on Hagley Road in Birmingham where armed police raided a flat overnight. The raids are believed to be linked to Wednesday’s terror incident in Westminster. Photograph: Richard Vernalls/PA Wire. 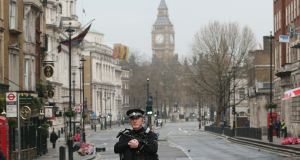 Police activity on Whitehall in London the day after a terrorist attack where police officer Keith Palmer and three members of the public died and the attacker was shot dead. Photograph: Jonathan Brady/PA Wire. 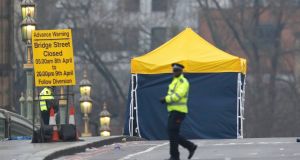 A police officer walks across Westminster Bridge the morning after an attack by a man driving a car and wielding a knife that left five people, including himself, dead and dozens injured, in London. Photograph: Darren Staples/Reuters 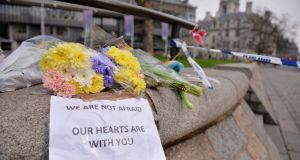 Floral tributes with a message reading ‘We are not afraid, our hearts are with you’ are seen near a police cordon in Westminster in central London. Photograph: /Justin Tallis/AFP/Getty 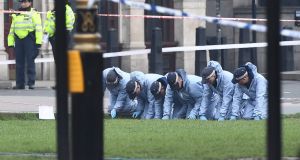 Police officers in forensics suits search the grass on Parliament Square gardens outside the Houses of Parliament. Photograph: Justin Tallis/AFP/Getty 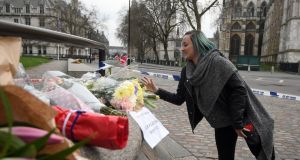 A woman lays flowers near the scene of Wednesday’s attack in London. Photograph: Carl Court/Getty 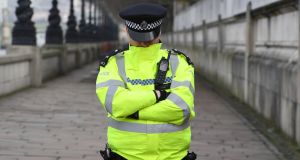 A policeman by the cordon near Lambeth Bridge following major incidents in Westminster. Photograph: Facundo Arrizabalaga/EPA

British police have named Khalid Masood, a 52-year-old from the Birmingham area, as the man who carried out Wednesday’s attack at Westminster in which four other people died.

On Thursday night, Scotland Yard said a 75-year-old man who was injured in the attack has died in hospital bringing the death toll to five including the attacker.

Masood, who was shot dead during the attack, was born in Kent and detectives believe he was most recently living in the West Midlands. Masood was also known by a number of aliases, police said in a statement.

Scotland Yard said Masood was not the subject of any current investigations and there was no prior intelligence about his intent to mount a terrorist attack.

However, he was known to police and had a range of previous convictions for assaults including grievous bodily harm, possession of offensive weapons and public order offences.

He has not been convicted for any terrorism offences.

Five people were killed, including the attacker, and 40 people were injured during Wednesday’s attack near the British parliament in Westminster, the worst of its kind in the UK for more than a decade.

One Irish person was among the 40 people injured which also included 12 Britons, three French, two Romanians, four South Koreans, one German, one Chinese, one Italian and two Greeks. Police said seven of the 40 injured people were in a critical condition.

The injuries suffered by the Irish person are not considered life-threatening, Tánaiste Frances Fitzgerald told the Dáil.

Minister for Foreign Affairs Charlie Flanagan said his department had offered and was ready to provide consular assistance to the injured person.

The Islamic State group said through its Aaamaq news agency that Masood was a “soldier” of the group.

Dozens of people were knocked down by his car before he got out and stabbed policeman Keith Palmer to death inside the grounds of the British parliament on Wednesday.

Eight people, three women and five men, have been arrested in London and Birmingham on suspicion of preparation of terrorist acts, Scotland Yard said.

Policeman Keith Palmer (48) and three civilians were killed in the attack. Masood also died after he was shot by police officers. Aysha Frade (43) and Kurt Cochran, an American tourist visiting from Utah, died in the attack while Mr Cochran’s wife Melissa was also injured and remains in hospital.

Ms Frade, a mother of two, worked as a teacher at DLD College in London and had family in the northwestern Spanish town of Betanzos. It is believed she was walking from the school where she taught when she was hit by the car driven by the attacker.

While the public should remain “utterly vigilant”, Ms May underlined “they should not and will not be cowed by this threat”.

“We are stepping up policing to reassure the public and as a precautionary measure it will mean increasing patrols in cities across the country, with more police and more armed police on the scene.”

Ms May also paid tribute to the bravery of the police at the scene on Wednesday.

A spokesman for the prime minister later said Ms May’s plans to begin the formal process of leaving the EU on March 29th would not be delayed by the attack.

“Clearly our investigation is ongoing – developing all the time – and is focused on his motivation, his preparation and associates.”

Witnesses on Wednesday described seeing one of the victims injured in the attack being pulled from the river Thames. It has emerged the young woman pulled from the water was a Romanian tourist celebrating her boyfriend’s birthday in London.

Italy’s ambassador to the UK Pasquale Terracciano said she had visited an Italian woman in hospital who lost consciousness for about 10 minutes after she was struck by the car’s bumper. The woman has undergone surgery for a compound leg fracture.

A minute’s silence was held in parliament and in front of police headquarters at New Scotland Yard at 9.33am, in honour of the victims – 933 was the shoulder number on the uniform of PC Palmer.

Although police have stressed there is no specific information to suggest any further threat to the public, officers will also be on heightened alert for any copy-cat incidents or further attacks.

UK police and MI5, supported by GCHQ, have been conducting an unprecedented and largely successful operation to contain the threat. Intelligence agencies estimate there are around 3,000 potentially violent Islamist extremists in the UK, most of them British.

Counter-terrorism units are carrying out more than 500 investigations at any one time and say they have foiled 13 potential attacks in less than four years.

Meanwhile, a man was arrested in Belgium on Thursday after he tried to drive into a crowd at high speed in a shopping area of Antwerp. The driver, a man of north African origin, was arrested after a chase in the city centre. He was carrying weapons and military uniforms in the boot of the car, according to the RTFB state broadcaster.

The incident in London began at around 2.40pm when a dark-coloured Hyundai i40 drove on to a pavement on Westminster Bridge.

The Palace of Westminster was locked down within minutes, with MPs in the House of Commons chamber told to lie on the floor immediately after the attack. The commons was suspended but MPs had to remain in the chamber for four hours until the lockdown was lifted.

As the dead and injured lay strewn on the ground, the vehicle crashed into a railing outside parliament, close to Big Ben. Masood ran from the car and through the gates of parliament, stabbing two policemen who tried to stop him.

Armed officers shouted at Masood and then fired a number of shots. PC Palmer also died, despite an attempt by foreign office minister Tobias Ellwood and others to revive him and bind his stab wounds.