Commuters near Waterloo station respond to the attack outside the House of Parliament in Westminster, London. 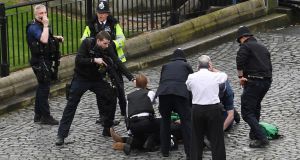 A policeman points a gun at a man on the ground outside the Palace of Westminster, London, on Wednesday. Photograph: Stefan Rousseau/PA Wire 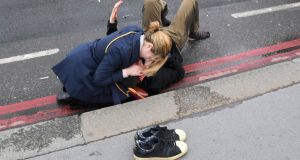 A woman assists an injured person after an incident on Westminster Bridge in London. Photograph: Toby Melville/Reuters 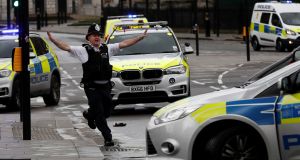 A police officer outside parliament during an incident on Westminster Bridge in which more than 40 people were injured. Photograph: Stefan Wermuth/Reuters

A large area in Westminster remained cordoned off last night after five people died and at least 40 were injured near the Houses of Parliament in the worst single terrorist attack in Britain for more than a decade.

An assailant carrying two knives mowed down pedestrians as he drove a car across Westminster Bridge before stabbing an unarmed police officer to death inside the grounds of parliament. Police shot the attacker, described as “a thick-set man in black clothes”, killing him.

Scotland Yard’s top anti-terror officer Mark Rowley said they believed they knew the identity of the attacker but declined to give any details. He said the man was thought to be inspired by Islamist-related international terrorism.

The Palace of Westminster was locked down within minutes, with MPs in the House of Commons chamber told to lie on the floor immediately after the attack. The commons was suspended but MPs had to remain in the chamber for four hours until the lockdown was lifted.

A car on Westminster Bridge has just mowed down at least 5 people. pic.twitter.com/tdCR9I0NgJ

The incident began around 2.40pm when a dark-coloured Hyundai i40 drove on to a pavement on Westminster Bridge, running over pedestrians, and leaving two dead and others seriously injured. Among the injured were three French secondary school students who were visiting London on a class trip.

As the dead and injured lay strewn on the ground, the vehicle crashed into a railing outside parliament, close to Big Ben. The assailant ran from the car and through the gates of parliament, stabbing two policemen who tried to stop him.

Armed officers shouted at the attacker and then fired a number of shots. One of the police officers also died, despite an attempt by foreign office minister Tobias Ellwood and others to revive him and bind his stab wounds. He was named as Keith Palmer, a 48-year-old husband and father.

Theresa May, who was in parliament after her weekly prime minister’s questions, was whisked away to Downing Street. The incident, which came exactly a year after co-ordinated bombings in Brussels, was the worst terrorist attack in Britain since the bombings in London on July 7th, 2005, which killed 52 people. “This is a day we planned for but hoped would never happen, sadly it is now a reality,” said Mr Rowley, acting deputy Metropolitan Police commissioner.

Police were satisfied last night that there was only one attacker but a large area around Westminster remained cordoned off. As the prime minister convened a meeting of the Cobra emergency committee, armed police were deployed across London.

Speaking outside 10 Downing Street later, Ms May struck a defiant tone, saying that the attacker’s choice of target was no accident. “The values our parliament represents – democracy, freedom, human rights, the rule of law – command the admiration of free people everywhere. That is why it is a target for those who reject those values. But let me make it clear: any attempt to defeat those values through violence and terror is doomed to failure,” she said.

There was no information to suggest that any Irish citizens were injured.