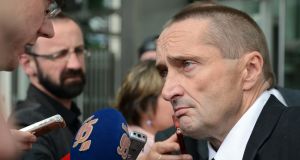 Solicitor John Devane, who died on Sunday, outside the Special Criminal Court in August 2013 after John Dundon was sentenced to life in prison for the murder of rugby player Shane Geoghegan. File photograph: Eric Luke/The Irish Times

Prominent criminal defence solicitor John Devane has died at his home in Clare on Sunday.

Mr Devane (54), was found dead at about midday by his wife at his home in Blackwater, Ardnacrusha, Co Clare, gardaí said.

His body was taken to University Hospital Limerick for postmortem.

“We do not suspect there is anything suspicious,” said a Garda source.

Mr Devane had represented all sides in the murderous Limerick feud which left up to 20 men dead between the late 1990s and mid-2000s.

The Limerick solicitor also represented members of the Keane gang, the Collopy criminal family and the Ryan-McCarthy crime gang.

Mr Devane had suffered a number of health problems in recent years after he contracted hospital superbug MRSA.

In 2015 he underwent surgery during which he claimed he sustained a broken neck, which left him using a wheelchair for about a year.

Mr Devane was also recently diagnosed with Osteopenia, a disease of the bones which led to an infection in one of his legs.

In the summer of 2016 he returned to work at Limerick District Court using a wheelchair at first, and then with the aid of crutches.

Paying tribute, friends and relatives said Mr Devane will be remembered as one of the country’s most controversial yet popular legal eagles.

In 2012, Mr Devane was found guilty of assaulting rival solicitor John Herbert during an incident at Limerick District Court on June 9th, 2011.

Mr Devane denied grabbing Mr Herbert by the neck and attempting to headbutt him.

However Mr Devane, with a practice at Quinlan Street, Limerick, escaped a criminal conviction after paying a €1,000 donation to charity.

In 2008, despite receiving death threats from gangland criminals, Mr Devane offered to mediate between rival criminal factions in an effort to bring peace to the streets of the Treaty City.

In the same year, Mr Devane published a memoir, Nobody Heard Me Cry, in which he claimed he was a victim of a Limerick paedophile ring involving members of the Garda, judiciary and clergy.

Despite being expelled from school, Mr Devane who was previously a well-known DJ in Limerick, attended UCC as a mature student, graduated in law and went on to become one of the country’s most recognisable solicitors.

He later took a class action suit against the State on behalf of 800 prisoners who had to slop out their own jail cells.

Mr Devane ran as an unsuccessful Independent candidate in the 2007 general election in the Limerick East constituency.

At the time he said he had contested the election to “get in and stir the shit”.

In 2003, Mr Devane famously served subpoenas on then taoiseach Bertie Ahern and minister for defence Michael Smith to appear as witnesses at Shannon District Court in the trial of two anti-war protesters charged with criminal damage and trespass at Shannon Airport.

Despite his many brushes with controversy, Mr Devane was regarded as a champion of the underdog and a legal representative of the poor and underclasses.

Brian O’Connor, a cousin of Mr Devane’s, said: “John was an immense character, and a fiercely determined advocate of the underdog with whom he identified.

“He was a very loving and giving family man. We were all very proud of him,” he added.