Cyclist killed in Co Cork after collision with car is named 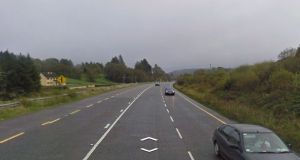 Donal O’Brien (45), from the Ovens area of Mid-Cork, was fatally injured as he was cycling west on the N22 Cork-Macroom road (above) and was struck by a car at about 12.25pm on Sunday. File photograph: Google Street View

A cyclist who was killed in a road crash on Sunday in Cork has been named as Donal O’Brien (45), who it is understood was well known in the car sales business in the Cork area.

Gardaí have appealed for witnesses to the collision in which Mr O’Brien was fatally injured when he was struck by a car while cycling on the N22 Cork-Macroom road near Ballincollig.

From the Ovens area of Mid-Cork, he was fatally injured as he cycled west and was struck by a car near Exit 1 on the Ballincollig Bypass at about 12.25pm.

The emergency services were alerted and paramedics attended to the casualty on the roadway but Mr O’Brien, who was married with a family, was pronounced dead at the scene by a doctor.

His body was removed to Cork University Hospital for postmortem as gardaí closed off the road to allow forensic crash investigators to carry out an examination.

The driver of the Renault Clio car, a woman who was also travelling west with two small children, was uninjured but was badly shaken and was treated for shock at the scene.

Gardaí in Ballincollig are investigating the collision and have appealed to anyone who may have witnessed the crash or who travelled the road at the time to contact them on 021-4214680.

The death of Mr O’Brien brings to six the number of people to die in road traffic collisions on Cork roads so far this year and brings the death toll on Irish roads so far in 2017 to 56.