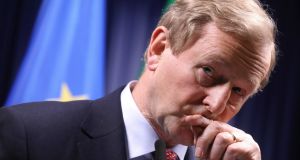 Enda Kenny: one Minister said there was a real prospect that the Taoiseach would not stand down as leader until the summer recess. Photograph: Olivier Matthys/PA

Senior Fine Gael figures fear Taoiseach Enda Kenny may not stand aside as leader this week.

Mr Kenny has confirmed that he will address the issue of leadership at a parliamentary-party meeting on Wednesday. But many in Fine Gael are concerned that he could prolong his tenure and face internal unrest. One Minister told The Irish Times there was a real prospect that Mr Kenny would not stand down as leader until the summer recess.

“He has all the power. He knows the two main contenders will not wield the knife. It will drive many mad, but you just don’t know what he will say,” the Minister said. “We could be back having this conversation in a few weeks.”

Most in the party expect Mr Kenny to stand aside at this week’s meeting and facilitate a leadership contest, but he is due to travel to New York, Seattle and Chicago between June 4th and June 9th. He has not yet confirmed if he intends to make the trip. As the contest to succeed Mr Kenny will run for about three weeks, if he were to announce his intentions this Wednesday the vote would conclude on June 6th, during his planned US visit.

Minister for Social Protection Leo Varadkar and Minister for Housing Simon Coveney are expected to be the two candidates to replace the Taoiseach as leader of Fine Gael. But Minister for Education Richard Bruton is reported to be canvassing parliamentary-party members for support to enter the race.

A spokesman for Mr Bruton said he had not changed his position and would not make any decision or announcement until the vacancy arose.

Mr Varadkar received support from a former adviser to Tánaiste Frances Fitzgerald this weekend when William Lavelle, a South Dublin councillor, publicly declared for him. It has also emerged that the Fine Gael TD Josepha Madigan and the Dún Laoghaire-Rathdown councillor Emma Blain have been attending key strategy meetings for the Minister.

Ms Madigan confirmed that she had been advising Mr Varadkar but said she would not make any public comment until Mr Kenny stands aside.

Mr Coveney is expecting to secure the support of three of the four Fine Gael MEPs. Sources in the Minister’s camp believe he will be backed by Seán Kelly, Deirdre Clune and Maireád McGuinness. Brian Hayes is expected to support Mr Varadkar.

Whenever the contest begins, contenders will have three days to gather the eight signatures they need to enter it.

Four party hustings will take place around the country – probably in Dublin, Cork, the midlands and the west – the following week. Members and councillors will be the first to vote; members of the parliamentary party will cast their ballots last.

The Fine Gael leadership will be decided by an electoral college that gives the parliamentary party – TDs, Senators and MEPs – 65 per cent of the vote. Rank-and-file members are allocated 25 per cent and councillors 10 per cent.