Man detained for questioning following death of woman in Kilkenny 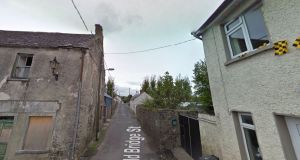 A man in his 30s was arrested after a woma was discovered with serious injuries. File photograph: Google Street View

A man has been detained by gardaí­ for questioning after the death of a woman who was found with serious injuries at a house in Freshford, Co Kilkenny.

The victim, aged in her 20s and originally from eastern Europe, was found outside the house on Bridge Street in the village with serious injuries just after midday on Sunday. She is believed to have had one young child.

It is understood the emergency services administered CPR to the woman at the scene and while she was initially responsive, she later died s at St Luke’s Hospital in Kilkenny.

A man in his 30s, also from eastern Europe, was arrested and taken to Kilkenny Garda station under Section 4 of the Criminal Justice Act, where he was held overnight.

Gardaí­ sealed off the house, where the woman had been living in an apartment with her partner and child, and members of the Garda Technical Bureau carried out a technical examination of the scene.

A postmortem examination is due to be carried out on the body of the dead woman.

The woman and her partner moved to the apartment in Bridge Street last year.

“This is just a quiet, rural village and everybody here knows each other. Something like this is totally out of character, nothing like this should happen in this locality.”

Mr McCarthy said he knew the victim to see, but not by name, and would often see her or her partner in the area in the mornings. “Bridge Street is a quiet area. There are a few apartments there and like all apartments, people come and go.”