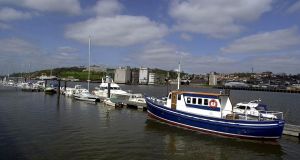 Pat Moran had objected due to worries that cruise ships would no longer have access to the city. Photograph: David Sleator

Eleventh-hour talks saw an oral hearing into Waterford’s €300 million redevelopment of the city’s North Quays called off at the last minute as an objector withdrew his opposition to the project.

An Bord Pleanála had been ready to examine two objections. However, on Tuesday evening one of those objectors, Pat Moran, who had objected due to worries that cruise ships would no longer have access to the city, withdrew.

The second objector, Eddie Lynch, who owns a petrol station that has been subjected to a compulsory purchase order by Waterford City and County Council, was then involved in last-minute talks yesterday.

The opening of the hearing was suspended as talks continued. Shortly afterwards it was announced by Mr Moran that Mr Lynch had withdrawn his objection and there was nothing left for An Bord Pleanála to rule upon.

Waterford City and County Council chief executive Michael Walsh said it was significant that the special development zone application was the first to receive approval without being subject to a full An Bord Pleanála oral hearing.

“I think on the whole it’s an open-for-business message, that if the right things are being done, people are open to investment in Waterford. Capital follows the point of least resistance, so it’s a really good message to other potential investors,” he said.

No details about the agreement reached with Mr Lynch were released. The petrol station owner had other issues with the project, aside from the costs involved in the compulsory purchase of his property.

The decision means An Bord Pleanála can begin to give approval to the outright compulsory purchase of the entire site so that Saudi retailers Fawaz Alhokair Group can begin development. Construction is planned to begin in the first three months of next year.

Waterford Chamber of Commerce chief executive Gerald Hurley said there was strong backing for the project throughout Kilkenny, Wexford, Carlow, along with Dungarvan in the west of the county.