Warm and sunny weather ahead with highs of 22 degrees 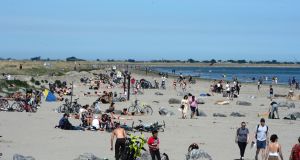 Warm and pleasant weather over the coming days will be replaced by much-needed rain on Friday, when the recent dry spell comes to an end.

Temperatures will range between 18 and 22 degrees on Wednesday though it will feel cooler along southern and eastern coasts.

Thursday will be dry, with sunny spells for much of the day and highs of 20 degrees, although it will be overcast in the west.

Friday will be windy with rain in the morning giving way to scattered showers. Rain will be widespread across the country from Friday afternoon, bringing some temporary relief to farmers in the east and southeast.

Met Éireann forecaster Andrew Doran-Sherlock said the rain will come as a “bit of a culture shock” given the absence of it over the last six weeks.

Cloudy Skies:
"High" for most of the country with "Moderate" levels along western and northern coasts.

Clear Skies:
"High" for most of the country with "Moderate" levels along the far north. pic.twitter.com/oMaSx6aP6w

“At the moment it is looking like there will be rain in most places. It’s going to feel like heavy rain because there has not been a huge amount recently,” he said.

However, the wet weather will be short-lived. There will be more showers on Saturday, but the long-term forecast is for a return to dry and warm weather next week.

“It will be a bit cooler on Friday and Saturday. Sunday is looking mostly dry. It is looking like it will be more settled going into next week. The temperatures will pick up again.”

Rainfall levels in April in the east and midlands were just a quarter of the monthly average and most places have only received a fraction of the rain they would expect in May. Just 4.2mm of rain have fallen at Dublin Airport’s weather station. The average for the month is 59.6mm.

The lack of rain is causing restricted grass growth across the country so any rain will be welcomed by farmers.

Last week, Irish Water asked the public to conserve water as households were using 20 per cent more water than they would normally because of people being at home during the lockdown.

Irish Water pointed out that domestic usage accounts for two-thirds of all usage and so the fall-off in use in commercial usage is not as great as the extra consumption by people staying at home.

The company said it had been an “extremely dry spell so we are continually monitoring our water sources for any signs of drought”.