Students leave school to virtual graduations and a rapping chaplain 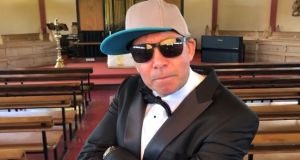 This year’s Leaving Cert students are missing out on a key rite of passage, but some schools are coming up with eye-catching alternatives to mark the end of school.

Matt Damon’s video tribute to the graduating class of Loreto Abbey in Dalkey has gained lots of headlines.

Ballyhaunis Community School has produced a virtual trip down memory lane for its students with a slideshow of student photos over the years.

And King’s Hospital School in Palmerstown, Co Dublin, has tried to go one better with its chaplain’s valedictory rap.

Canon Peter Campion has been posting short “thoughts from the chapel” online since school closed in mid-March.

His thoughtful meditations around hope and encouragement have, as the lockdown progressed, taken a turn for the zanier.

In recent week they have featured appearance from Miss Piggy, Kermit the Frog, Bert and Ernie.

Last week he moonwalked down the chapel aisle to the sounds of the Jackson Five.

His Covid-19 rap has topped them all, however, as he swaps his cassock for a baseball cap, shades and snappy blacktie.

“They say this is a chapter in our history / Who cares? I can’t celebrate my valedictory / I’m all dressed up, don’t know what this proves / I should be tearing up the dancefloor showing off my moves ... to the class of 2020, we’ll have our day, don’t you worry, don’t you dismay, we’ll be okay,” he raps.

Yesterday he was enjoying the attention, but said his slightly embarrassed teenage daughters made sure it wasn’t going to his head.

“I wanted to do something a little different to keep the students amused and entertained,” he said.

“I was on my own in the chapel and, just out of boredom, I figured I’d try a rap for the sixth form, who’ve had a tough time of it. You’re on your own and you’re not looking into horrified faces, so it’s kind of liberating in a fun way.”

The video formed part of a prerecorded chapel service and student concert that was broadcast online, instead of the school’s traditional valedictory service, dinner and concert.