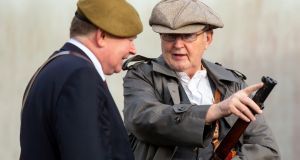 At a re-enactment to commemorate Martin Doyle were Brendan O’Neill and John Greer. Photograph: Mary Browne

In March 1919 Martin Doyle returned to his native New Ross a war hero. He won the Victoria Cross in September 1918 for an incredible feat of gallantry in which he rushed a German trench and rescued a badly wounded British tank sergeant.

As he alighted from the train at New Ross, the townspeople escorted him to his home on Mary Street Upper and a trumpeter played a bugle call as he passed the Royal Hotel. He then attended a civic reception outside the main square in the town.

More than a century later the townspeople again turned out to remember Doyle, this time not only as a British army war hero but as a man who had fought for Irish freedom in the IRA and then joined the National Army during the Civil War, in which he was wounded.

Outside the town hall in New Ross, a marble paving stone paid for by the British government in honour of Doyle was unveiled by Cllr John Fleming, the chairman of New Ross Municipal District.

The flagstone of the town hall remembers the “glorious” Battle of the Boyne. It sits next to a plaque remembering Michael O’Hanrahan, who was executed for his role in the Easter Rising, and opposite a statue to the men from the town who fought in the 1798 rebellion.

Doyle embodied a lot of these contrasting allegiances. He left the British army in June 1919. In October 1920 he joined the IRA in East Clare and the Irish Army on its foundation.

The date chosen for the event, February 2nd, was not a coincidence, said Cllr Michael Sheehan, chairman of Wexford County Council. It marked the anniversary of the founding of the State’s Army.

The event began with a parade through the town. Re-enactors wearing the first World War khaki of the British army mixed with those wearing the overcoats, bandoliers and peaked caps of the old IRA.

Irish army veterans and those from the Royal British Legion laid poppy wreaths and tricolour wreaths beside the paving stone. The British government was represented by the defence attaché Col Darren Doherty and by Sarah Tiffin, the deputy head of mission at the British embassy in Dublin.

It was a special occasion for members of the Doyle family. Two of his three daughters are still alive and in their 90s, though Doyle died in 1940 when he was just 46. Monica Condon, Doyle’s niece, laid a wreath on behalf of her mother, Lil Doyle.

At least 50 members of the family were in attendance, including David Cooney, a grandnephew of Doyle and a former Irish ambassador to Britain.

“He was a soldier to his core and he served with great distinction. He reflected his time. More Irish men served in the British army than fought in the War of Independence,” he said.

“Martin Doyle reflected the changes that happened at the time as the mood of the people changed. He tells the story of what happened in Ireland 100 years ago.”