Inaccessibility is limiting how many lakes can be tested, as required by EU water directive

A team from the Marine and Fresh Water Research Centre of GMIT (Galway, Mayo Institute of Technology) are the first in Ireland to use flying drone technology to take samples from remote rivers and lakes. Video: Bryan O'Brien 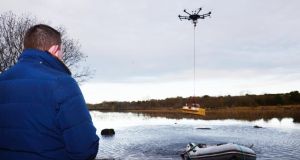 Drones could be dispatched across hundreds of remote Irish lakes to carry out legally required water testing too problematic for humans, experts believe.

An ongoing two-year research project by scientists and drone technicians has almost completed testing the viability of using unmanned aircraft for the work essential to monitoring Irish water quality.

Funded by the Environmental Protection Agency (EPA), the project offers the potential for drones to augment traditional testing. It can replace boats and humans when testing lakes that are out of reach or too difficult to access, such as Ballyquirke Lake, Moycullen, Co Galway, where testers have previously had to carry an inflatable boat some distance from the nearest access road.

“We are only looking at a fraction of the lakes [in Ireland]; if you can have a faster method of sampling then you can probably increase the number,” said Dr Heather Lally, researcher in freshwater ecology and biology at Galway-Mayo Institute of Technology (GMIT), who has been leading the project.

“A lot of them you just can’t get to. At the moment what the EPA are focusing on are the drinking water [sources] which need to be very large lakes.”

There are over 12,000 lakes in Ireland. Under the EU Water Framework Directive, samples are supposed to be taken from more than 800.

Those that are tested make up 84 per cent of total surface area – the larger water bodies used for drinking water abstractions. They are also considered of regional, local or scientific interest in relation to protected habitats and species.

In recent years “nutrient loading” in lakes has become more noticeable and increased research and monitoring has been undertaken in response.

In 2017, the EPA advertised for someone interested in developing drone technology as a solution to lake access. The five-person project, jointly undertaken by GMIT and Model Heli Services (MHS), was funded to the tune of €132,000 under the current EPA Research Programme.

The team set about sending their drones, which are approximately four feet wide, into lakes to dip containers and capture two litres of testable water. The sample is then returned to shore for storage before being taken away for laboratory testing. But apart from getting it to work, the research team have attempted to make the technology viable.

“What we didn’t want was a system that works really well but then you can’t go and get it,” said Dr Lally.

“We know it works from a product point of view and we also know that [of] the samples we are getting, there is very little difference” to that traditionally collected.

GMIT, with input from Rutgers University in the US, also produced the world’s first literary review paper on drone technology application to water testing, published earlier this year in the Science of the Total Environment journal.

It highlighted one regulatory issue common to all drone applications – the limitations of “line of sight” flying, or the use of drones on long flights – that could result in the necessity for several launch sites on one lake.

However, the paper noted that, given the expense of water testing, the use of drones “could offer a safer, easier, more reliable and accurate assessment”.

The team’s work is due to finish in February, after which they hope to apply for funding from Enterprise Ireland to determine potential markets for the technology and to develop an enhanced prototype.