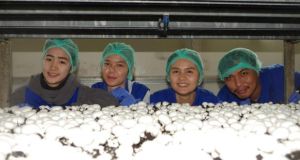 Fruit and vegetable growers have warned of a major labour crisis on their farms if an employment permit scheme that allows them to hire workers from outside Europe is not expanded.

The pilot horticulture work permit scheme opened in May 2018 to allow people from non-European Economic Area (EEA) countries to work here if employers can show they cannot get workers in Ireland or EEA countries.

However, the 500 permits provided for the horticulture sector were all allocated before the end of 2019, according to the Department of Business, and the sector still does not have enough workers.

Many of the permits were taken by the mushroom industry, while carrot, tomato and Brussels sprouts growers also employed workers under the scheme.

Mushroom picking is a labour-intensive business and this work has attracted migrants from countries such as Poland and Lithuania in the past. However, as unemployment levels fall, these countries are now facing their own labour shortages.

Hazel Codd doesn’t know how the family mushroom business would have found new workers without the pilot scheme. The Codd family began growing mushrooms 30 years ago in a small shed on the farm in Tullow, Co Carlow. Today, Codd Family Mushrooms employs around 240 people and it is the largest mushroom supplier into the Irish market. It hired more than 60 people from Thailand under the work permit scheme.

“It has been extremely difficult to get workers because there is a huge crisis in the horticulture industry,” she said. She noticed the problem emerging about two years ago as the economy improved.

Despite placing advertisements and using social media locally, nationally and in European countries such as Latvia and Poland, they could not get staff to harvest their mushrooms.

So, when the pilot scheme opened last year, Codd Family Mushrooms were first in the queue for work permits. Some Thai people living in Carlow knew of people back home looking for work, and the connection with Thailand was made. She said there were some teething problems with the application process initially, so it took longer than expected, but finally, in May 2019, the first group of new employees arrived from Thailand.

Under the scheme, the employer must organise accommodation and language classes, so there may soon be 60 Thai people speaking in a Carlow accent, thanks to their classes in Tullow.

Ms Codd said it was essential that the scheme was continued and expanded.

“And of course, the boom in the construction sector is taking many workers because horticulture can’t compete with the higher wages in that sector.”

Under the work permit scheme, mushroom growers must pay €22,000 per annum for a 39-hour week, and Mr Farrell said these costs made it very difficult to compete with Polish mushroom growers, who were paying staff €4 an hour.

He pointed to moves recently announced by the Department of Business to address labour shortages in hospitality, construction, health and road haulage and urged the Government to give the same attention to the horticulture sector.

From January 1st, 2020, quotas were removed for chefs coming here under the work permit scheme, and Mr Farrell said the same approach should be taken for fruit and vegetable farm workers.

Strawberry growers come under major pressure for extra workers at certain times of the year, and the IFA has called for more flexible labour permits to facilitate this seasonal demand. It has also called for a measure to allow workers to move between industries. Extra help is needed on dairy farms during the spring calving season, while certain horticulture enterprises need extra staff in the late spring and early summer period.

Hazel Codd said the scheme had temporarily eased the skills shortage on her farm but the problem had not gone away. “We have a lot of challenges in the mushroom sector so anything that can help us get staff is welcome.”