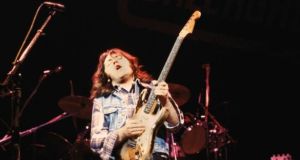 There will be walking tours of places closely associated with guitarist Rory Gallagher. Photograph: Fin Costello/Redferns

Some of the places most closely associated with legendary guitarist, Rory Gallagher are among the venues in Cork that will feature in this year’s Cork Heritage Open Day.

Connaughton recalled the genesis of the Rory Gallagher Walking Tour began over a decade ago when he was asked by Cork City Library to give a lecture on Gallagher .

He based his talk that evening on a ramble around the city and the places that had a formative influence on Gallagher.

Among the places to feature are the site of the original Crowley’s Music Shop on Merchants Quay where Gallagher bought his famous Sunburst Fender Stratocaster, St Kieran’s College where he went to secondary school and the Savoy where his band, Taste, played support to The Dubliners in 1967.

More than 40 buildings in Cork city are to be opened to the public on Saturday as part of Cork Heritage Open Day including many which are generally off-limits to the public such as the Masonic Hall on Tuckey Street and Heineken Ireland’s Murphy’s Brewery on Leitrim Street.

Cork born novelist and playwright Cónal Creedon, who grew up on nearby Coburg Street, is the ambassador for this year’s event.

He said this year’s Cork Heritage Open Day is the biggest to date with a number of new venues added.

“We are guardians of the magnificent living heritage of our city that has been passed down to us through our ancestors,” Creedon said.

“It is a heritage to be treasured and enjoyed at every view and vista; every bridge that spans the River Lee, every twist and turn of the winding streets, every hand hewn block of sandstone, limestone and granite that has been placed one on top of the other by past generations of merchant princes, every steel and glass structure erected by the more recent generations of developer kings.”

Creedon said the open day was a special celebration.

“ For one day, every year, the doors are thrown open and we, the citizens, are invited to experience the beating heart of our city. It is an invitation not to be missed,” he said.

Heritage officer at Cork City Council Niamh Twomey said that this year’s programme offers something for families of all ages and she urged people to avail of the opportunity to visit buildings not normally open to the public or events such as a Medieval Day at Elizabeth Fort.

“We invite people to come and peek inside the many wonderful buildings that are throwing open their doors for one day only. From educational to ecclesiastical, medieval to military and civic to commercial, every building involved has its own unique history and architecture.”

Ms Twomey said among many exciting events is an opportunity to sample soup made for Quaker Soup Kitchens during the Famine, hear a talk on the history of the City Bridges by Antoin O’Callaghan and find out more from Patrick Walsh about the Navvies who built Cork’s railways.

For a full list of events taking place on Cork Heritage Open Day, which is organised by Cork City Council in partnership with the Heritage Council, please visit www.corkheritageopenday.ie or pick up a brochure at Cork City Library or Cork City Tourist Information Office on Grand Parade.