Why is no one celebrating the Applied Leaving Cert students?

It is a valuable alternative to the regular exam. Yet, numbers competing it are falling 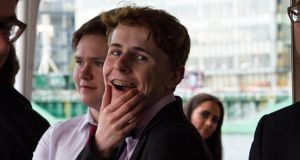 Ben O’Leary Fitzpatrick, who received his Leaving Cert Applied results this week. He says very few students are aware of the programme.

I received my Leaving Cert results this week, but I wasn’t worrying about points. I didn’t need any.

That’s because I completed the Leaving Cert Applied programme. As the title suggests, it is a different type of exam.

Instead of everything being concentrated on a single, high-stakes exam, my results were helped in part by class work, project work and work experience over a two-year period.

The programme helped me achieve my full potential. I have dyspraxia, a developmental disorder which causes difficulty in activities requiring co-ordination and movement. Along with things that affect me on a daily basis, I found it hard to complete exams.

Throughout my school life I found it difficult to achieve, even though I was putting hours of extra work in every week.

So, in third year, when all my friends opted to complete transition year, I decided to try the two-year Leaving Cert Applied programme.

Why do you never hear about it? Because very few students who do the Leaving Cert choose it or are even aware of it. Just 2,758 students completed it this year, a 13 per cent drop over the past five years.

By comparison, more than 50,000 sat the traditional exam, a number which has been rising in recent years.

The Applied programme is neglected and suffers from a lack of funding and awareness even though it is crucial for students who, like me, cannot complete the traditional Leaving Cert for a variety of reasons.

Throughout fifth year I worked constantly to my goal: every week I would do a little bit of work that contributed towards my Leaving Cert.

The programme is split into three key parts: projects (which include key assignments and tasks), work experience (eight weeks of work experience over a two-year period) and, finally, the written exams.

I completed key assignments daily in different classes that contributed toward almost a third of my final grade over the two-year programme.

Simultaneously, while completing these assignments, I worked on a total of seven tasks.

A student completes a booklet and that gives you eight out 10 credits, and the other two credits for each task are achieved through an interview with a State examiner. This contributed to just over a third of my final grade.

The final third of my programme involved the dreaded exams.

At least by the stage I sat them, I knew I had received two-thirds of my of my final grade. That was a relief.

Exams results in Leaving Cert Applied are a little different to the regular Leaving.

As for my results this week, I’m delighted to say it all worked out well.

I’ve been accepted into a pre-university course in Dunboyne College of Further Education and will focus on politics and European studies.

Significant numbers of students like me still complete the Leaving Cert Applied , but many more could do so if it was treated seriously by policy-makers.

In my opinion there is one big reason why fewer and fewer students are doing Leaving Cert Applied every year.

The Department of Education time and time again refuses to upgrade the course. It recently announced a review of the course – but that is not enough.

The Leaving Certificate Applied course was first introduced in 1995. In the early days they added subjects like computers, or ICT.

However, this course hasn’t been updated since it was launched in the late 1990s! This means it is hopelessly of date.

It’s time for the Department to implement changes that have been long overdue.