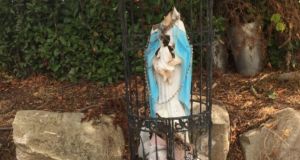 Local Labour Councillor Peter O’Brien said he was ‘disgusted’ at the damage done to the memorial. Photograph: Peter O’Brien

A statue and plaque commemorating victims of the Carrickmines fire has been vandalised.

Local Labour Councillor Peter O’Brien said he was “disgusted” at the damage done to the memorial which is near the site of the tragedy.

“Words fail me at the mindlessness of some people. I am horrified to see this,” he said.

Disgusted to see the statue at the plaque, commemorating the tragic deaths of members Connors, Lynch & Gilbert families, has been vandalised pic.twitter.com/ZvGFlS4Mg0

Earlier this week, the relatives of those who were killed in the fire moved back into the halting site which has been redeveloped by Dún Laoghaire-Rathdown County Council.

The fire, which broke out in the early hours of the morning, spread rapidly from caravan to caravan as many of those who died were sleeping.

In the aftermath of the fire the survivors called for an inquiry saying the council had positioned caravans too close together.

They said the fire hydrant had been cut off and electrical work had been carried out the day before the blaze.

Inquests into the deaths on the site are to resume next month after being adjourned in March to allow gardaí continue their inquiries into the incident.