Urging households to adopt renewable tech may increase energy use 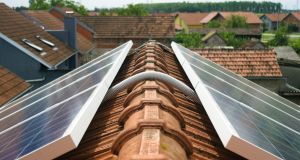 Households using Government grants to install solar panels and other renewable technologies do not see a reduction in their energy usage, and may end up using more electricity, new research has found.

A research paper by academics from the Technological University of Dublin (TU Dublin) suggests that the Government’s policy to encourage households to adopt renewable technologies may have the opposite effect to that intended.

According to the paper, the presence of the technologies “resulted in more electricity use compared to households without micro-RES [micro renewable energy systems]”. The authors suggest that this may be a result of what is called a “rebound effect”. This phenomenon dictates that when consumers lower the cost of their electricity bill by producing their own power, they will gradually increase their energy consumption so their bill returns to a similar level, eventually using more electricity in aggregate.

“Given our findings suggest that the presence of micro-RES does not result in a decrease in total energy use in the home, we suggest that this element of Irish energy policy around residential sector needs to be re-evaluated.”

The authors suggest that adopters need to “change their ‘behaviour as usual’ approach to address the rebound effect”.

The paper also found that the technologies are more often used by wealthy households. This is contrary to the Government’s policy goals, intended to make the devices accessible through grants.

Those installing the technologies “are more likely to be wealthier households, taking advantage of support schemes designed to financially incentivise households that are tentative about whether or not to adopt micro-RES”.

“As these schemes are funded through consumer energy bills, this may relatively disadvantage poorer households.” The State, through the Sustainable Energy Authority of Ireland, offers grant support for the installation of the so-called micro-RES technologies, which include solar panels and wind turbines. “The results would suggest that the households adopting micro-RES and availing of the support schemes are the ones that need them least.”

The paper was authored by Michael Chesser, Jim Hanly and Damien Cassells from TU Dublin, in conjunction with Nikolaos Apergis from the University of Piraeus.