The Government will next month publish a new Brexit contingency plan as a disorderly no-deal departure for the UK has become more likely, Taoiseach Leo Varadkar said said. Video: Gov.ie 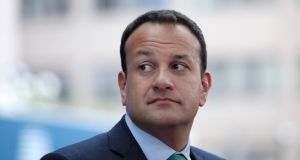 The Government will next month publish a new Brexit contingency plan as a disorderly, no-deal exit by the UK from the European Union has become more likely, Taoiseach Leo Varadkar has said.

In a speech at Dublin Castle during the national economic dialogue on Wednesday, Mr Varadkar said that despite the detailed planning which was under way, a no-deal Brexit would be “deeply challenging with many risks which can’t be mitigated away”.

He said the Government would next month publish an updated no-deal Brexit contingency action plan setting out the state of readiness and actions to be taken between now and October.

Minister for Finance Paschal Donohoe will prepare two October budgets, one based on a no-deal Brexit and the other based on the UK securing a deal.

A decision on what budget to apply will be made in September, Mr Varadkar said.

He also pointed toward trade tensions that he said were threatening the global economy, and recent international tax developments likely to impact foreign investment.

“With respect to recent international tax developments, we believe it is important that we maintain a predictable, transparent and stable tax regime to facilitate continued cross-Border trade and investment.

“Ireland recognises that further change to the international tax framework is necessary to ensure that we reach a stable global consensus for how and where companies should be taxed.

“Ireland is engaged in the OECD BEPS [base erosion and profit shifting] framework to build that global consensus and is open to solutions so long as they respect our right to compete fairly and respect the legitimacy of Ireland’s longstanding 12.5 per cent corporate tax rate.”

In terms of the upcoming budget, Mr Varadkar said the Government could not allow day-to-day spending increase too fast.

The Taoiseach said the Government could not become too reliant on “volatile revenues”.

“As you know, over the last few years we have benefited from bumper corporation tax receipts. However, we can’t assume that money will always be there.”

He said the €700 million to be made available for new spending in the October budget was likely to be insufficient to fight off the likely negative impact arising from Brexit.

“Apart from measures to mitigate the effects of Brexit, in whatever form it is going to take, the other key priority has to be to protect frontline services,” Mr McGrath said.

He was among a number of speakers to take part in a panel discussion as part of the national economic dialogue, at which participants discuss views on what the budget should contain.

In his speech, Mr McGrath also warned of the need to deal with an “affordability crisis” in the housing sector and called for “proper” multi-annual budgeting in health.

“Many of our budgetary problems come in the area of health. We have a handle on what the demographic trends are [but] we are not costing them and bringing them into long-terms plans properly,” he said.

“It remains the case that if we do not have a rise in public infrastructure to match the scale of the population, things will become unsustainable regardless of the external context,” he said.

“In many cases we see this private affluence developing and in many cases public squalor is a consequence of that and I think that is a great challenge for this society,” Mr McCoy added.

Labour finance spokeswoman Joan Burton described Mr Donohoe’s summer statement as “a bit of fiction”, adding that the Government should be more forthcoming on information ahead of the budget.