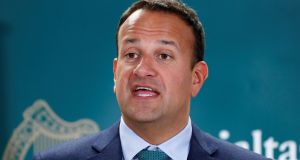 Taoiseach Leo Varadkar: If the offer stacks up it is a ‘big turnaround’. Photograph: Reuters

Telecommunications company Eir is likely to tell the Government “red line” issues in the contract for the National Broadband Plan (NBP) would have to be removed to reduce the cost of delivering the plan towards the €1 billion mark.

Taoiseach Leo Varadkar said on Wednesday he wanted to establish if Eir’s claim, at an Oireachtas committee earlier this week, that it could complete the NBP for €1 billion, “stacks up”.

The Department of Communications is seeking clarification from Eir about its chief executive Carolan Lennon’s claim that it could roll out high speed broadband to 540,000 homes, farms and businesses for just a third of the sum the State has agreed to invest in the project, and a fifth of the estimated final cost.

Mr Varadkar said Government wanted to establish “whether this offer is real, if it stacks up” because it was a “big turnaround” for the company, which had previously withdrawn from the tender process.

He told the Dáil if Eir could do the plan for €1 billion “then I’m all ears and we have to listen to it”. He later told Green Party leader Eamon Ryan “we have to take what was said...seriously”.

Following Ms Lennon’s intervention on Tuesday, the Department emailed a response for more information to the company on Wednesday morning, and a spokesman for Eir said that it was working on a response.

It is understood that the company will tell Government it is only possible to deliver the NBP for €1 billion if certain elements are dropped or radically adjusted. For example, the requirement to have a separate wholesale division, and other elements flagged by then Eir CEO Richard Moat when withdrawing from the NBP process in 2018, would have to be sacrificed.

Eir’s intervention at the Oireachtas this week was criticised by Alto, the umbrella group for alternative telecommunications providers. “Eir’s evidence to the Oireachtas raises a lot of questions about its true motivations and is unlikely to deliver a better outcome for customers,” it said.

“We are concerned that handing Eir a subsidised network now, rejuvenating a highly profitable incumbent, would be a regressive step for Government, and one that does not benefit the information society agenda.”

A spokesman for National Broadband Ireland (NBI), which is the preferred bidder for the project, had no comment when contacted.

Meanwhile, Mr Varadkar told Fianna Fáil leader Micheál Martin that “we need to know what kind of delay would be imposed on people in rural Ireland waiting for broadband if we went back to a new procurement process”.

He said “everyone understands that neither a private nor state company can just be given a contract. There has to be a new procurement process.”

Mr Martin pointed to documents released under the Freedom of Information Act from a meeting in September last year when then minister for communications Denis Naughten was in office.

The Fianna Fáil leader said the documents showed a “cavalier approach” to ballooning costs, which increased €300 million in one month.

Mr Martin said he welcomed “that the Government is prepared to look at this to try to deliver the same objective but in a much more cost-effective way for the taxpayer”.

Mr Martin and the Green Party leader noted that Eir rejected the Taoiseach’s comments on Tuesday that the company would bypass houses and not connect them and would not cover the 25 years of maintenance costs.

Mr Ryan said it would require “slightly different service level arrangements but, again, these would be the same that apply in the rest of the country. Eir is adamant that it can do it”.