Large gatherings of young people in Galway city centre and at house parties have been condemned as an “insanity” by local representatives. Video: @ShifiStarkid/Twitter 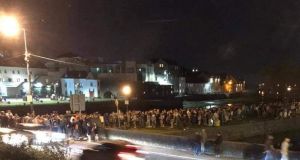 Authorities should look at organising mini-beer festivals on university campuses while at the same time controlling off-licence sales as a means of controlling student parties during Covid-19, a leading medic has said.

Emergency Medicine Consultant Dr Chris Luke said he was a firm believer in allowing students to mark their arrival in university in a controlled, regulated environment rather than what happened earlier this week in Galway and Cork.

Stressing he was speaking in a personal capacity, Dr Luke said that he firmly believed that the Irish authorities should try to avoid what is happening in the UK where pubs are closing at 10pm and everyone congregates on the street.

“Having fun is important to general wellbeing so we’ve had youngsters who have been locked away for six months and have had the obvious cabin fever which in turns leads to what we call ‘the irrational exuberance’ of the party.

“What they have done in the UK is that they are allowing people go to the pub, enjoy their drinks and then just as what sociologist, Emile Durkheim identified as ‘collective effervescence’ is peaking, they chuck them out on the street.

“And that’s happening in all the pubs and hostelries and if you are going to try and curtail public disorder in a busy student town and limit people congregating, you stagger your openings and your closings.”

Dr Luke said that some UK universities opted to lock students in their halls of residence as happened in Manchester and Glasgow and he believed that this was far too draconian a response from college authorities.

Similarly, he dismissed suggestions from some public representatives that the Army should be brought in to patrol Irish cities after hundreds of students gathered at Spanish Arch and Shop Street in Galway during Freshers’ Week.

“We have known for months that the youngsters are going back to college and we know what happens in Freshers Week for the last 20, 30, 40 years and it’s becoming more intense in recent years,” said Dr Luke who is based in Cork.

“I would have thought what the universities and higher institutes should do is have what I call ‘mini Munich Beer Fests’ on campus - they get their Electric Picnic style tents with tables and have waiters and waitresses serve students.

“So rather than allow the young people roam around the streets of the various universities cities, there should be on campus festivities to mark the rite of passage that is the first week in college and allow people left off steam.

Universities could learn from music festivals such as Electric Picnic where such beer tents are very well marshalled by stewards and it would ensure that student socialising takes place in a controlled and regulated environment.

Conversely, authorities could move to limit house parties and uncontrolled events by reducing the off-licence opening hours or introducing a minimum price initiative which had worked in Scotland in reducing alcohol consumption.

“So the twin approach I would advocate is promoting on-license regulated mini-beer festivals with pre-booked table service and on the other hand a really strict off licence sales regime for the duration of the pandemic,” he said.

Dr Luke said that he believed it would be relatively easy for the universities and Institutes of Education to organise such events as there are many currently idle in hospitality sector who would welcome such a business opportunity.

Earlier this week, scenes of hundreds of students congregating at Spanish Arch and on Shop Street in Galway prompted strong condemnation from public representatives, saying it would lead to a surge in Covid-19 cases in the city.

In Cork, local residents around University College Cork have campaigned for an end to what they described as “Covid-19 lockdown parties” which took place during the summer in privately rented houses in the vicinity of the university.

And they obtained a court order obliging a landlord to cut noise levels at two of his properties where tenants were holding lockdown parties after they brought a private prosecution for noise pollution under environmental laws.

UCC authorities issued a warning to all UCC students last week that anyone found to be in breach of Government guidelines on Covid-19 when organising or hosting a house party could face sanction including possible expulsion.

Interim UCC President, Prof John O’Halloran said it was a measure of the seriousness of the threat posed by Covid-19 that UCC was committed to treating breaches of government guidelines on the infection very seriously.

“In particular, students found to be organising, hosting or attending gatherings which are in breach of guidelines will be subject to sanction up to and including expulsion from the University where warranted,” he said.