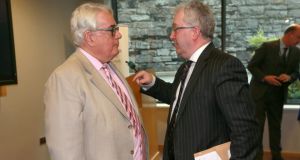 The Chief Justice, Frank Clarke, is to meet shortly with Mr Justice Séamus Woulfe, following an inquiry into the latter’s attendance at an Oireachtas golf outing in August which said resignation would be a “disproportionate” penalty.

In a short statement following the report on the so-called “Golfgate” controversy by the former chief justice Susan Denham, the Supreme Court said it fully accepted her recommendations and conclusions.

“The resolution process recommended in the review will now commence,” the court said, which was interpreted by senior legal sources last night to mean that Mr Justice Woulfe will face “a dressing-down” by the Chief Justice.

Mr Justice Woulfe, who previously served as attorney general and was appointed to the top court in July, is not currently listed for hearing any Supreme Court case in the Legal Diary.

The Denham report said he had not been “sufficiently vigilant” about his position as a newly appointed judge when he accepted the golfing invitation, but a resignation request would be “unjust and disproportionate”.

Under existing rules, the Chief Justice has no power to impose a penalty of any kind, but senior figures have been greatly irked to see the Supreme Court embroiled in a public controversy.

The former chief justice’s findings stand in contrast to the political judgments that faced former European commissioner Phil Hogan and former minister for agriculture Dara Calleary, who both had to quit over the row.

Following the eruption of the controversy in August, Taoiseach Micheál Martin said the golf outing had “seriously undermined and damaged confidence in the Oireachtas”, while Tánaiste Leo Varadkar said it should not have happened.

Meanwhile, acting chief medical officer Dr Ronan Glynn said the golf dinner had not been “in line with public health guidance” and “it seems clear therefore that it should not have taken place”.

In her report, which did not have the power to make enforceable findings, the former chief justice said that it had been “not unreasonable” for Mr Justice Woulfe to believe the Station House Hotel dinner “was Covid-19 compliant”.

She said she was of the opinion that Mr Justice Woulfe had committed “no breach of law”, and that he had bona fide reasons to accept assurances from organisers that the dinner complied with the rules.

Furthermore, she said, there was evidence that the Station House Hotel had relied on State-drafted rules that were in force on the night the dinner took place on August 19th.

“Mr Justice Woulfe got caught up in a media controversy over the dinner in Clifden,” Ms Justice Denham said, adding that it had “reflected negatively on the Supreme Court, which is a collegiate court”.

Ms Justice Denham said it was her opinion that Mr Justice Woulfe had not been “sufficiently vigilant”.

The Judicial Council Act, passed last year, contains a provision where a complaint against a judge can, with his or her consent, be resolved by “informal means”, but the provision has yet to be commenced.

Mr Justice Woulfe told the review that he ate in a hotel room with about 45 diners at a time when the rules stipulated no more than 50 should be at a gathering.

In his dealings with Ms Justice Denham, Mr Justice Woulfe said he had briefly mentioned the golf outing to the Chief Justice, prior to attending, but had not known then that there would be a dinner.

Though his attendance did not raise issues about the separation of powers laid down in the Constitution, the former chief justice said he should still not have attended.