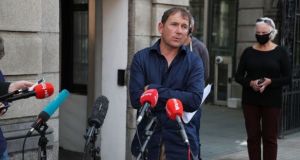 TDs will vote next week on legislation to allow people who are terminally ill to decide the timing of their own death and avail of assistance to end their lives.

People Before Profit TD Gino Kenny, who introduced the Dying with Dignity Bill in the Dáil on Thursday evening, asked deputies to support it going to committee stage for legislative scrutiny.

He said the Government’s proposal to establish a special joint oireachtas committee to report in 12 months would unduly delay the Bill which provides for people suffering from a terminal illness, verified by two doctors, to be able to avail of assistance to end their lives, an act that currently carries a 14-year prison sentence.

“It applies only to those suffering from a terminal illness and only to adults in their full mental capacity and able to make a rational and conversant decision about their lives.”

Mr Kenny rejected claims by opponents of the legislation who say it will lead to a “slippery slope” where the value of human life is diminished.

Independent TD Peter Fitzpatrick said the Bill was “euthanasia plain and simple”. He said in other countries, once such a law is permitted, it is no longer confined to “so-called hard cases” and he asked what message the Bill would give to people feeling suicidal.

Minister for Justice Helen McEntee said “no matter what way we look at it, assisting someone to die is a very complex issue which gives rise to medical, ethical and moral issues, as well as criminal justice and constitutional issues”.

She said “consideration also needs to be given to the vital public interest in protecting persons who are nearing the end of their lives and who might be vulnerable and at risk of abuse.

“In legislating for the complex issue, Ireland would become one of only a small number of countries in the world to legislate for assisted dying.”

Sinn Féin TD David Cullinane said his party would oppose the Government’s amendment. Labour leader Alan Kelly said this issue could not be kicked down the road any longer.

Social Democrats TD Róisín Shortall backed the establishment of a special committee and cited the committee on the Eighth Amendment as a good example of how the issue could be properly considered.