Department of Education made payment to Canadian company without tendering process 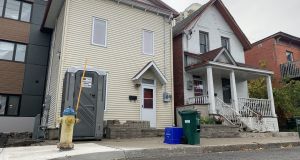 The registered address for Polymetrika International Inc is a residential home in Ottawa, according to company records. Photograph: Aedan Helmer

Polymetrika International Inc, the Canadian firm linked to errors in Leaving Cert results, has been paid a total of €163,000 by the Department of Education without a tendering process.

The registered address for Polymetrika International Inc - 150 Hinchey Avenue - is a residential home in Ottawa, according to company records.

The company’s chief executive is Dr Fernando Cartwright, though it is not clear from the firm’s website or other records whether other employees or contractors are based at the address.

He was not available for comment on Thursday when a reporter called to the address.

Polymetrika’s website states that it “enjoys an international clientele” and that its primary focus is on “large-scale assessment and knowledge-mobilisation projects”.

The department confirmed that it originally awarded Polymetrika a contract worth €71,500 to cover 65 days of work earlier this year for statistical and other services as a contingency measure in the event that the Leaving Cert exams were cancelled.

It was paid a further €91,000 for additional work outside the contract at a rate of more than €1,100 a day to help provide coding services for the calculated grades system.

Dr Cartwright has previously been involved in research papers which have involved the Education and Research Centre in Dublin.

A department spokeswoman said Polymetrika was appointed on the basis that it had “recognised expertise in what is a highly technical and specialised field”.

Last night Minister for Education Norma Foley told the Dáil a full review of the calculated grades process will be conducted as she again apologised to Leaving Certificate students for the errors in coding “that should not have occurred”.

Students who receive an alternative college offer can continue in their current course for the year. “They remain eligible for free fees and Susi funding as if they were starting college for the first time.”

She told the Dáil that registration for the Leaving Certificate will be extended from 5pm on Friday until Wednesday next.

Sinn Féin education spokesman Donnchadh Ó Laoghaire asked how Polymetrika got the contract. Ms Foley said the company had been engaged to advise on calculated grades in May and the department availed of a negotiated procurement procedure to appoint the firm.

Earlier the Dáil was told that the coding error was identified when the person involved in modelling the coding was working on the Applied Leaving Certificate results.

Green Party leader Eamon Ryan defended the delay in making the information public against criticism that it was the latest instalment of the Government’s “fiasco factory”.

Mr Ryan also said the exact number of students affected by the errors will only be known when a new model is run with a revised code which has been checked to ensure no further errors.

He understood that a further CAO offer will be made “towards the end of next week”. That was “the best advice” they had as to how long it would take to sort out the grading error.

And he said the Leaving Certificate exam would go ahead next year.

Aontú leader Peadar Tóibín described the controversy as the latest instalment of the Government’s “fiasco factory”.

He asked: “Did the company make this mistake? Is it consequently liable for the financial costs that will accrue to the State or did the department give the incorrect directions? Will the taxpayer be left pick up the costs again?”