Flights from Spain and Bahamas both declared medical emergencies on board 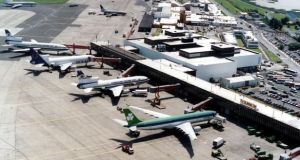 Shannon is the country’s busiest airport for aircraft diversions.

United Airlines flight UA-121 diverted to Shannon after the crew reported they needed to seek medical attention for a passenger. There were 174 passengers and crew on board the Boeing 767-400 jet which was travelling from Barcelona in Spain to Newark, New Jersey in the United States.

The flight was approaching the south coast of Ireland at around 11.45am when the flight crew advised air traffic controllers of their emergency and requested clearance to divert to Shannon.

The pilot also sought permission to descend and dump aviation fuel off the south. This was to ensure that the aircraft touched down within safe landing weight limits.

After spending about 20 minutes jettisoning fuel, the flight diverted to Shannon where it landed safely at 12.44pm. The jet was met on arrival by airport fire and rescue crews who are mobilised as part of procedures when an aircraft dumps fuel before landing.

The aircraft taxied to the terminal where it was met by airport authorities and National Ambulance Service paramedics. A male passenger was removed from the aircraft and after being assessed by paramedics and was transported to University Hospital Limerick for treatment.

Earlier, a British Airways flight travelling from The Bahamas in the Caribbean to Heathrow in London also diverted to seek medical attention for a passenger.

British Airways flight BA-252 was almost six hours into its flight and still had about 90 minutes from London when the crew declared a medical emergency and requested permission to divert to Shannon.

The Boeing 777-200 jet landed safely at 9.50am and was met at the terminal by ambulance paramedics. A passenger was removed to University Hospital Limerick for treatment.

Both flights continued their journeys once the passengers’ baggage had been removed and the aircraft were refuelled.

Shannon is the country’s busiest airport for aircraft diversions. It has the longest runway in Ireland at almost 3.2km (10,495ft) and capable of handling all passenger and cargo aircraft types.