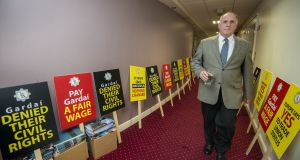 General secretary of the Garda Representative Association (GRA) Pat Ennis has effectively been deposed at a meeting of the association’s central executive committee.

Mr Ennis faced a re-endorsement vote and while he won just over 60 per cent support he has effectively been deposed after just over 3½ years leading the Garda’s largest staff representative body.

The GRA, which represents almost 12,000 rank and file gardaí, appointed him for a near four-year term, which would have expired at the association’s annual conference in two months, at which point he was expected to seek to remain in the job.

Mr Ennis took up the post a number of months later than it should have been filled in 2016 because his predecessor, PJ Stone, had been in the role for so long replacing him became a protracted process.

While Mr Ennis was expected to go before delegates at the GRA annual conference in April to seek a second term in his role, he effectively lost his position at a central executive committee meeting in Dublin on Thursday.

The GRA had made no comment on the development at the time of writing.

Under GRA rules Mr Ennis required two-thirds of the GRA’s central executive committee to recommend his re-appointment to the association’s annual delegate conference at the end of April. Conference delegates, representing gardaí from across the State, would then have voted on whether to endorse the decision.
When Mr Ennis faced a re-endorsement vote on Thursday in Dublin before the 31-strong executive committee he fell short of the two thirds majority he required.

The Irish Times understands he secured 61 per cent of the vote. While there are 31 central executive committee members, 10 members have two votes because of the size of the Garda divisions they represent.
Mr Ennis will remain as GRA general secretary until the association’s annual conference in two months, when a new general secretary will be chosen.

The fact he has effectively been deposed at Thursday’s meeting comes after some turbulent years for the GRA, which is by far the largest staff body in the country.

Internal unrest has characterised much of the last four years since former general secretary PJ Stone retired after 19 years in the post. Because the job had been filled by the same person for so long, when a vacancy arose there was intense competition to fill it.

Mr Ennis won the vote to succeed Mr Stone and when he took up the post of general secretary he was still a Garda member but was seconded to the GRA. About two years later he retired from the Garda on age grounds but remained on as GRA general secretary.

Those close to Mr Ennis say he had been acting to reform the GRA after a consultants’ review of the association highlighted serious shortcomings with how the organisation was run.

When the GRA – along with the Association of Garda Sergeants and Inspectors – threatened strike action in November 2016 in a row over pay, many in the GRA were unhappy with the way its leadership handled the negotiations.

Mr Ennis faced a no-confidence motion at the time, which he survived. However, it was later agreed that consultants be engaged to review the entire workings of the association.

The resulting report, by Ampersand Consultants, suggested the association was “dysfunctional” in places and that its 31-member executive was bloated and needed to be cut to 12 members.

It was also critical of in-fighting in the association’s executive, adding it is perceived by its members as being “out of touch” as well as “a closed shop”.

The consultants’ review found almost € 660,000 was spent on expenses in 2016 by members of the association’s central executive committee. That figure represented one-quarter of the organisation’s income from members’ fees and government funding.

Much of the money was spent on subsistence and mileage; incurred by members travelling around their own divisions and driving to Dublin once a month for a two-day executive meeting.

There was also a “club within a club” where internal loyalties determine who gets what, the consultants found. There was just one woman on the 31-member central executive despite the GRA’s membership being 27 per cent female.