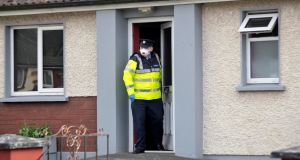 A Garda at the house on Blackthorn Close, Kells, Co Meath, where two men, one from Navan, and one from Kells died in a house fire this morning. Photograph: Colin Keegan/Collins

In a statement the Garda said members of the force and other emergency services units were called to the scene of a fire at a house on Blackthorn Close at about 3am on Thursday.

The men were pronounced dead at the scene. Two other occupants of the house, a male and a female, were uninjured.

Gardaí are investigating the circumstances of the incident although it is understood it is not being treated as suspicious. However, a forensic analysis of the scene is awaited.

vne of the dead men is thought to have been the tenant of the home.

Locals said none of the other people involved are usually resident in the home. Garda sources said the four people had been socialising in the house befor the fire started.

Local man John Tallon who lives in the area he was ‘hugely saddened’ by the death of Mr Reilly, who was known as Biggy.

“Biggy was living here for the last 16 years and everyone knew him. He was extremely well-liked,” he said “He was a brilliant plasterer by trade and if you ever needed a hand with anything, he was always very obliging. We just can’t get over the news.”

Sinn Féin Cllr Eddie Fennessy who is from Navan, said he was in shock at the death of Mr Power.

“I have known John Boy for years. He used to play football with us as kids. He was well-liked and popular and wouldn’t harm anyone,” he said. “Everyone in Clogherboy and the wider community has been hit hard with this news this morning and I extend my sympathies to his family and friends.”

Meath County Council, which owns the house where the fire broke out, said it was awaiting the results of the Garda investigation into the cause of the blaze and extended its sympathies to the families of the deceased.