Coronavirus: Encouraging signs for Ireland in calm before surge 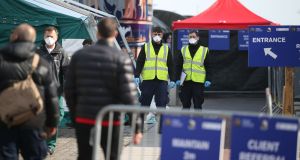 LE Samuel Beckett on Sir John Rogerson’s Quay in use as a coronavirus testing facility: The number of diagnosed cases is growing slightly more slowly than feared. Photograph: Nick Bradshaw

The second raft of measures announced by the Government in an attempt to curb the spread of coronavirus represent a considered and proportionate response to a challenge that is growing by the day.

The measures, set out on Tuesday, will only add to the economic misery already heaped upon citizens by Covid-19, and have failed to satisfy those voices calling for a complete lockdown of society.

However, the fact that they fall around the centre line of what might have been done does not mean they amount to a fudge. Throughout this crisis, Ireland has taken a measured, consistent and evidence-led approach to the challenge involved.

Where countries on either side of us have flip-flopped and changed tack with astonishing rapidity, the Irish authorities have followed a graduated approach based on the best available international and local advice.

In other countries, some politicians have played politics with the pandemic, but in the State the lead has been taken by scientific experts, with the Government effectively playing a support role that has demanded the provision of large sums of money.

In common with other countries, Ireland has made mistakes along the way. There was a failure to clamp down on travel from problem areas, notably Italy, quickly enough. Ireland also seems to be behind the curve on the provision of personal protective equipment for health staff and on testing.

This was apparent again over the past 24 hours when the criteria for testing were altered again, effectively meaning people with only one Covid-19 symptom will not be tested.

It is hard not to see this as a change designed to cut the demand for testing, which was running out of all proportion to the system’s ability to provide the service. It now seems the official approach is the same as that of the World Health Organisation – “test, test, test” – but with the rider “though not just yet”.

At Tuesday’s briefing by the National Public Health Emergency Team, chief medical officer Dr Tony Holohan freely accepted that public health officials had “cast their net too widely” when loosening their criteria a fortnight ago.

At the time, the focus was on the removal of travel from overseas as a criterion for being tested for the virus. However, it was the decision to test people with just one symptom that really opened the floodgates.

The resulting 20,000 people a day who sought testing included people with other ailments, including flu, as well as a good proportion of the “worried well”. Lost among the numbers were the real priority cases, such as healthcare workers and, at times, the more severely ill.

Now Ireland is adopting the World Health Organisation (WHO) case definition for Covid-19, which requires two signs – fever and a respiratory symptom such as a cough or breathlessness.

This begs the question why didn’t we adopt the WHO rules in the first place?

There are uncomfortable echoes of the cervical cancer controversy here – where an offer of free repeat smears to the wider population of women ended up clogging up the system and creating months of delay in the screening programme.

In the current situation, too many patients are waiting too long to be tested or too long to get their results. Hopefully, this is only a short-term problem and the backlog will be cleared, as a prelude to wider testing in the population.

Still, in this calm-before-the-surge moment, there are some encouraging signs. There is widespread adherence to social distancing; the number of contacts of confirmed cases is dropping; and the number of diagnosed cases is growing slightly more slowly than expected – though this may be due to the seven-day time lag caused by testing delays.

It is still too early to know whether the measures adopted in Ireland will work, but at least the hands on the tiller seem to know where we are headed.