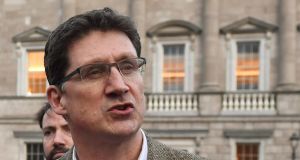 The Green Party did not mince its words in the message it delivered about government-formation on Wednesday.

Party whip Neasa Hourigan said the Greens would not be involved in talks with any of the three larger parties during the coronavirus pandemic as doing so would be inappropriate during a period of international crisis.

The only discussions it is willing to engage in are on forming a national unity government, for six months perhaps, by the end of which politics might return to partisanship as usual.

The Greens argue that Fine Gael politicians – from Leo Varadkar to Simon Harris – should retain their key roles during the pandemic, meaning there would be slim pickings for other parties.

This development coincided with Fianna Fáil and Fine Gael resuming talks on forming a coalition, with both parties appearing to have shifted up a gear when it comes to this prospect in the last 24 hours.

But could a unity government be a runner? Or is it wishful thinking on the part of the Green Party in an attempt to unify itself amid internal differences over going into coalition?

Party leader Eamon Ryan thinks a unity government is possible, but that a consensus would have to be reached across the board.

“I think most Irish people are actually thinking in the national interest of the decisions to be made and are ahead of politicians on this,” he said.

The unity government idea has all but unanimous backing in Ryan’s party, among the practical and pragmatic, but also among the more radical members who are reluctant to engage with Fianna Fáil or Fine Gael.

“Everyone is behind the parliamentary party on this decision,” says Saoirse McHugh, who unsuccessfully contested the general election in Mayo.

“Most people recognise that it is a cynical use of the Covid-19 crisis to push parties into a government quite quickly. It is not the time to be slobbering around with that, and changing Cabinet positions.”

“My view,” says Limerick TD Brian Leddin, “is we do not engage in any talks with any of the big three during Covid-19.

“Instead we seek a unity government for a short time. The assumption would be that negotiations (on government formation) would be suspended until after the crisis had passed and then we would look at it again.”

The Greens have gone below the radar in the past week but have been busily talking to the other parties, members of which doubt a unity arrangement would work.

“We have never had a national government here, even during World War II,” said a Labour Party figure. “The practicalities of it do not work.”

Sinn Féin and Fianna Fáil sources also believe it is not a realistic prospect. But senior Greens think it could work.

Hourigan and colleagues say they are open to what form such a government might take. Dublin South Central TD Patrick Costello says that even the Fine Gael caretaker government continuing in power for now, with other parties abstaining, was a form of unity government.

“The reality is that a national government is the only thing that is possible in the teeth of the pandemic. We are only at the beginning of the curve,” he said.

With talks on a coalition between Fianna Fáil and Fine Gael intensifying, the Greens have essentially removed themselves from the equation. But there is an acceptance that questions of its participation will re-emerge.

“In the long term, you do need the push and shove,” says Galway councillor Pauline O’Reilly. “I do not believe that consensus within politics can ever function. Politics has to be transparent. You need voices of opposition.”

McHugh says she would love to see a left-leaning government formed and rather not have her party join a FF-FG coalition. “Unless there was a transformative programme for government promised.”

Ryan and more experienced figures are keen to get into government. But there is an issue – membership has increased from about 700 to 2,700 in the past two years, and the bulk of these new recruits are more radical.

Any coalition would have to be approved by two-thirds of the membership, and given the huge influx of younger members, it could be next to impossible to secure the green light for participation in a FF-FG coalition passed at a party convention.