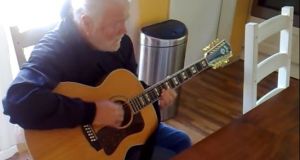 Thom Moore moved to Ireland in 1971, settling near Sligo where, together with his wife Kathy and fellow Americans Sandi and Rick Epping, he formed the folk rock band Pumpkinhead. Photograph: YouTube

Tributes have been paid to American songwriter and musician Thom Moore. The artist wrote such well known songs as Caroline Rua and Saw You Running and enjoyed critical success in Ireland during the 1970s with his folk rock bands, Pumpkinhead and Midnight Well.

Singer, Mary Black described Moore as “a truly gifted songwriter with a beautiful golden voice” and she spoke of her gratitude to Moore for offering her his song ‘Carolina Rua’ which she recorded and she described his death as “another great loss to Irish music and musicians”.

“I remember back in 1989 when we were on the last day of recording the album ‘No Frontiers’ and Thom walked into the studio saying he had some songs. He took out his guitar and sang ‘Carolina Rua’ and ‘The Fog in Monterey’.

“His lyrics had such wisdom and truth alongside clever melodic tunes that stay with you long after the song is finished. We were mesmerised and realised instantly that the album wasn’t finished and both songs were recorded by us later that day. Ar dheis dé go raibh a anam.”

Singer-songwriter Johnny Duhan told of his sadness at the death of Moore (74) on St Patrick’s Day following a long illness. He recalled playing with him some years ago in Sligo where the American-born musician had settled more than 30 years ago.

“Sad to hear that the fine songwriter, Thom Moore has died. This is one of his finest songs, The Navigator. I had the pleasure of sharing a stage with him some years back. A good memory. May he rest in peace,” tweeted Duhan.

Born on an island off California on December 6th, 1943, Moore grew up in Ethiopa and Lebanon after his mother, a reader of Isa Dinesen and Lawrence Durrell, persuaded her husband to take up employment in east Africa and the Middle East.

After graduating from the American Community School in Beirut, he joined the US navy and served three years as a journalist on the staff of the Pacific Fleet commander in Pearl Harbor, Hawaii, before attending the University of California in Los Angeles where he studied Slavic languages.

After graduating he moved to Ireland in 1971, settling near Sligo where, together with his wife Kathy and fellow Americans Sandi and Rick Epping, he formed the folk rock band Pumpkinhead. This band won the fifth Letterkenny International Folk Festival.

Pumpkinhead were signed to Polydor and released three singles but their debut album was the first LP to be released on Mulligan Records. It was critically acclaimed for its mixture of traditional tunes, original songs and covers such as Neil Young’s Are You Ready for the Country.

Pumpkinhead split up in 1976 and Moore formed Midnight Well with Janie Cribbs, Gerry O’Beirne and Mairtín O’Connor and their debut albut was well received. Moore earned considerable praise for his songwriting on numbers like Still Believing, Saw You Running and Jessie’s Friend.

The break-up of his married led Moore to return to the US in 1978. But he continued performing there and writing songs. And it was as a lyricist in the 1980s that he achieved considerable success, with Mary Black recording his song Carolina Rua.

Moore, who was once managed by U2 manager Paul McGuinness, worked for a time as a Russian translator for Soviet inspectors examining US military sites in California. But he later moved to a permanent monitoring site in Votkinsk near the Urals.

There he fell in love with and married an interpreter escort, Lyubov Gennadyevna Koroleva, before taking up a position as Professor of English at the Udmurt National University in nearby Izhevsk even though he returned frequently to Ireland to play music.

It was while in Russia that he composed most of the material for his first solo album, Gorgeous and Bright. But he returned to Ireland with his new family, moving back to Sligo where in 2013 he released another solo album, Seven Things Aloom which was again well received.