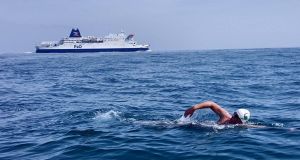 This was an achievement in itself, but made even greater not just by his disability but because he swam almost twice the length of the channel to achieve his goal.

The distance between Dover and Calais is 34km in a straight line, but the current took him in an S shape across the channel so by the end he had swam 61km.

The challenges were considerable. Preparation had to be done by email and the crew in the boat that was following him had to communicate with him by lights.

On Sunday, Nolan was been given a prominent role in London’s St Patrick’s Day parade in recognition of his achievement. He was also only the second deaf person to swim the English Channel.

Last week Nolan returned to his old school, the Holy Family School for the Deaf in Cabra.

There he met primary school pupils from the school who were keen to find out from him what he did to prepare for such a mammoth achievement.

“For me I was honoured to be invited back and it was lovely to see some of the old teachers,” he said through a sign language interpreter.

“I was very happy and confident to explain the whole story of the Channel swim. I hope I came across as a good role model for the deaf children there.”

Mr Nolan works in England as a senior employment adviser for a disability charity.

He now hopes to do the North Channel swim from Northern Ireland to Scotland. Though shorter than the English Channel, this is a much more difficult swim because of the temperature of the water which is considerably colder and the presence of jellyfish during the summer months.

“That is one of the toughest channel swims in the world,” he said. “Perhaps in a few years I will give that a try. It’s a big commitment and training. It is in the back of my mind for now.”

When he did his English Channel swim, he did so to raise awareness of the campaign for Irish sign language.

He was delighted when President Michael D Higgins signed the Irish Sign Language Act into law in December last year after a 30-year campaign.

“That was a hugely positive step. It will break down communication barriers and improve education for deaf children and employment prospects,” he said.

“To do the Channel swim and to get recognition in the same year makes me feel absolutely fantastic.”